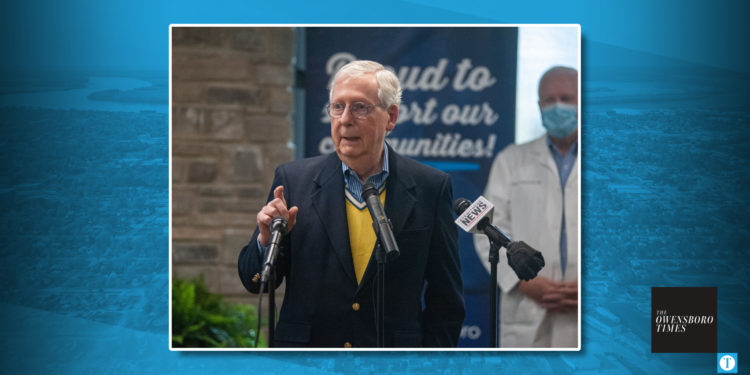 “We’ve had a great outcome of this situation,” Strahan said. “We’re down to very few patients in the hospital that are COVID-positive, and we’re looking forward to that day we get to the big goose egg, when nobody is here with COVID-19.”

McConnell spent time reflecting on his last visit to OHRH last year. At that time, he said, there were no vaccinations on the market, the number of infections was getting worse by the day, and the economy was tanking.

“At my office, we were wrestling with what to do,” he said. “We had both a healthcare emergency and an economic emergency.”

McConnell said it took “extraordinary bipartisan cooperation” to pass the CARES Act, and that he was proud of Congress’ ability to respond to the emergency it faced. From the very beginning, McConnell said lawmakers knew it would take an effective vaccine to get through the pandemic in one piece.

Calling Operation Warp Speed and the development of three different vaccines in a year’s time “a modern miracle,” McConnell praised each company for its vaccine efficacy as well.

After Joe Biden was elected president in November 2020, McConnell said he and a number of Republican senators approached Biden about what they could do to move forward with a bipartisan system.

McConnell said last year’s stimulus package could be justified because the country was dealing with a pandemic. However, with a current national debt of $27 trillion, it was getting more difficult to support another stimulus package.

“By the time we reached this year, we had three effective vaccines. We were moving in the direction of opening the economy,” he said. “In my view, and in the view of most of my Republican colleagues, the size of the bill should reflect where we’re at now. Not where we were a year ago.”

The $1.9 trillion bill passed a couple weeks ago had “no support” from Republicans in the House and Senate because “we saw it was anchored in conditions a year ago rather than currently,” McConnell said.

Much of that bill was spent on items unrelated to the pandemic, McConnell argued, saying 1% of the $1.9 trillion stimulus package was used on the vaccines, while 9% was allocated for healthcare.

“The rest of it, arguably, was unrelated to the conditions we found ourselves in now,” he said. “We’re in a different place.”

He also said he was skeptical about supporting a fourth stimulus package that would add to the country’s $27 trillion national debt.

Regarding vaccinations, McConnell said the country needed to achieve herd immunity — immunity for roughly 75% of the population — in order to reopen the economy fully.

When asked, McConnell said he supported Gov. Andy Beshear’s decision to enforce mask-wearing across the state of Kentucky.

As for the future, McConnell remained hopeful, saying he hoped to achieve herd immunity and fully reopen the economy in the next few months.

“I’m hoping to put the whole experience in the rearview mirror by early summer,” he said.