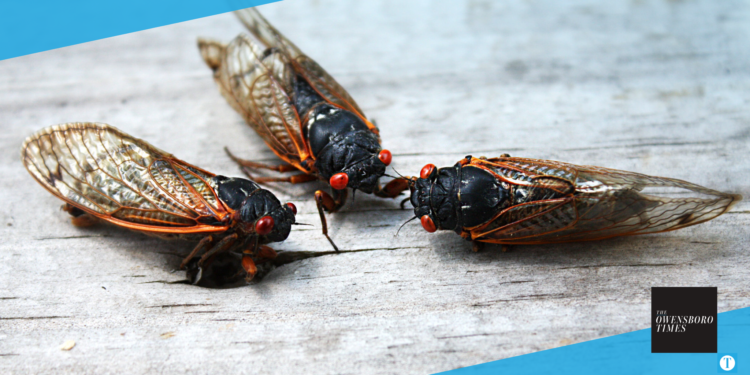 If your fascination for cicadas outweighs your disgust, you could help with an unprecedented citizen science effort in Kentucky.

Billions of cicadas from one of the nation’s largest 17-year broods, Brood X, are expected to crawl aboveground in the eastern U.S. in coming weeks.

Cicadas appear annually, but periodical cicada broods are unique for their extended, mysteriously-timed hibernation. Twelve broods emerge every 17 years, and the other three emerge every 13 years. (There are theories to how they count the years.)

Periodical cicadas have distinctive black bodies with red eyes, red legs and red veins in their clear wings, which sprout once they emerge from 64-degree soil. Their song can reach 100 decibels, surpassing the level emitting from gasoline-powered lawn mowers.

With population densities estimated at 1.5 million bugs per acre, their sheer numbers protect them from predators, like raccoons, snakes and squirrels, which gorge themselves on the buzzing buffet way past the “I’m full” phase and into the “I’m never eating that again” phase.

After mere weeks of singing and sex, the two-inch bugs die.

“It’s a very southern gothic summer romance,” said Dr. Jonathan Larson, an entomologist at the University of Kentucky. “They make a bunch of music, they mate a bunch of times, then they die.”

Before they go, female cicadas lay eggs in the twigs and branches of trees like oaks, elm and dogwoods — so people with young trees might want to cover them with netting with holes under a half-inch wide.

Their offspring will crawl underground and quietly suck sugar from tree roots until it’s their turn to party in 2038.

But during this spring’s brief opportunity for research, entomologists are hoping that citizens can contribute reports of activity.

Early entomologists recorded Brood X across most of Kentucky in historical maps, based on eyewitness accounts.

In 2004, Daviess County was among just 16 counties with reports of cicada sightings.

This year, Larson hopes residents can help the state revise its map of Brood X.

“We would like to know more about the distribution of Brood X in Kentucky,” Larson said. “We really want people to go out and look for these bugs.”

It is important to be wary of short-lived, patchy populations called “stragglers.” When broods overlap, periodical cicadas can emerge in places where they are not expected.