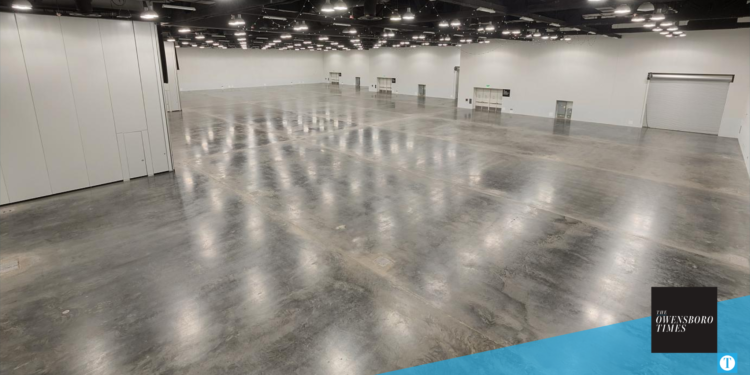 City and County officials officially approved a joint agreement to help fund the new portable sports floor at the Owensboro Convention Center, a project announced earlier this month and one that is expected to make a multi-million dollar economic impact locally.

The sports floor will cost roughly $600,000 to install at the Convention Center. Owensboro Health is contributing $300,000, while the City of Owensboro and Daviess County Fiscal Court are providing $150,000 each.

Owensboro Health will also serve as the sponsor of all events where the flooring is used.

The project includes a modular, portable sports floor along with all the necessary equipment for multiple indoor sporting events including volleyball, basketball, pickleball and futsal. It also includes three-tiered bleachers for fans.

Laura Alexander, General Manager with Spectra Venue Management at the Owensboro Convention Center, previously said the floor can be made into three basketball courts or nine volleyball courts, complete with the lines for each sport.

“Those are three sports that are growing, especially in the youth division,” Alexander said.

She noted that the Convention Center had looked into an indoor sports flooring project for several years, but that the cost had proven to be too expensive.

“So having Owensboro Health come on board, as well as the City and the County, really did help bring this project to life,” Alexander said.

According to City Manager Nate Pagan, the equipment will be owned by the City, and any unused funds will be held in escrow for future maintenance and repair of the flooring and equipment.

When not in use, the equipment will be stored in offsite trailers provided by the County.

“Everyone has come together in this partnership – the city, county, local hoteliers,” said David Smith, Fiscal Court Director of Legislative Services. “We couldn’t do it without everyone’s involvement, especially Owensboro Health.”

Calling the project a “fair and reasonable partnership for the community,” Pagan said the assets will enhance Owensboro’s reputation for sports tourism.

Pagan said the partnership would allow the City to pursue events that could not otherwise occur in the Convention Center, which would “help reduce the few weekends when events are not scheduled to take place.”

Alexander said utilizing the flooring for six weeks out of the year was a good starting point to see how much interest it acquired. Already, she said, Kentucky Wesleyan College was in talks to host a volleyball tournament at the location in September.

Moving forward, Alexander and her team will meet with a consultant and go over a series of images that detail the flooring’s layout. The consultant had already suggested using tape for the lines of each court instead of paint so that the flooring could be used for a variety of sporting events with ease.

Mayor Tom Watson said he was continuing to approach this project with “indifference,” namely due to his belief that Owensboro should focus on creating a full-time indoor athletic facility instead.

However, Alexander said this project would serve as a good jumping off platform for the future.

“I think this is a great in-between just to kind of see what the demand is for sports here in Owensboro,” she said. “We could always take this floor and put it inside the indoor sports facility as well.”