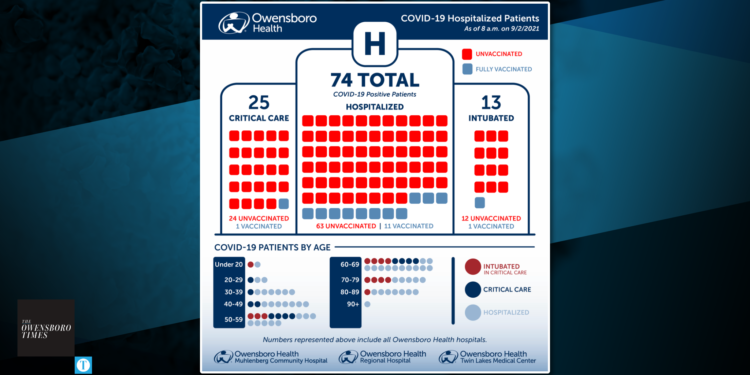 Local health officials gave an update on the state of COVID-19 in the community during a virtual meeting Thursday with Daviess County Judge-Executive Al Mattingly.

Two of the 74 OH patients with COVID-19 are under 20 years old — one of which is intubated. Another 21 patients are less than 50 years old, with four of those in critical care.

OH recently began publishing the numbers for COVID-19 patients, including an age breakdown. While it was in part done as an act of transparency, OH is also sending those figures to local public officials to make sure they understand just how dire the situation is.

“It’s when you start seeing the numbers that it really starts to sink in that ‘Oh, this is real,’” said Owensboro Health Regional Hospital Chief Medical Officer Dr. Francis DuFrayne.

After five months of slow decline, Daviess County’s incidence rate — the number of new cases daily per 100,000 people — has risen dramatically over the last six weeks.

“We are seeing some of the highest numbers of COVID-19 in our community since the pandemic began,” said Clay Horton, Green River District Health Department Director. “I think any of us that have been watching this closely saw this coming.”

Like they’ve said on repeat for months now, Horton and DuFrayne urged the community to get vaccinated.

Horton said he’s asked the same questions over and over and it feels like “the same story, a different week” in many ways.

“There are no secret answers here,” he said. “The thing we keep talking about is people need to get vaccinated. That’s the number one thing that they can do to protect themselves.”

Horton said there vaccinations were up about 10% since June.

“That’s what we need to see because really the exit ramp for this problem is getting as many people vaccinated as possible,” he said.

In their latest update Tuesday, the Health Department reported that 51% of Daviess Countians were vaccinated, the highest rate of any county in the Green River District.

Mattingly noted that number is a bit misleading because no one under age 12 can receive the vaccine. Mattingly said he thinks about 63% of those over 18 are vaccinated, and more than 85% of those 65 have.

“That is not true at all,” DuFrayne said. “Vaccinated or not, you can still acquire the COVID infection. We’re not saying vaccination protects you from that. That’s why you keep hearing things about how even vaccinated people who are indoors in public places should put masks on. You can still acquire the infection. If you’re vaccinated, you are much better protected from serious symptoms — what we call morbidity and mortality. Your mortality rate improves by 95%.”

Horton said the surge is largely a result of the Delta variant, though loosening restrictions and dropping mitigation strategies also played a role.

He said while infections were likely to happen one way or another, the severity of cases could have been prevented with vaccinations.

“Probably with Delta, this surge was inevitable,” Horton said. “We were probably always going to have a high rate of cases. What’s unfortunate is the high rate of hospitalizations and the mortality that we’re going to be seeing was avoidable. That would have been avoided if we’d had more people vaccinated.”

Horton also addressed misperceptions about the ability to test for a specific variant.

“They can sequence these out,” he said. “They do the genomic sequencing and that’s how they identify what strain or what variant it is. That’s a labor intensive process, so it is true that we don’t test every sample, but they test a subset of every positive case. Then we can make predictions about percentages of the different variants, and right now it’s pretty much all Delta.”

Treatment options remain one of the most controversial points of COVID-19, especially among the unvaccinated.

“We have seen a very significant reduction in admissions and reduction in symptoms in people who have received that therapy,” he said.

DuFrayne said monoclonal antibody infusion should be administered within 3-4 days if the symptoms appear severe. He said while supply is still limited, they do have primary and secondary criteria that patients typically need to meet to receive that treatment.

He said another treatment proven to be effective also includes Remdesivir, an antiviral medication. Patients must be hospitalized to receive that treatment, which is then administered once a day for 5 days. Dy Frayne said there has been “fairly good response” for those patients.

DuFrayne does not suggest ivermectin, a medicine used to treat parasite infections, because there he said there is no proof that it works.

Horton and DuFrayne both acknowledged a booster shot could be beneficial, especially for those who are immunocompromised.

They expect further guidance to come out regarding the best timeline for getting the third shot, and that anyone with questions should speak to their personal doctor.

Horton said the Health Department is still trying to do contact tracing but it’s difficult. They also can investigate as in-depth as they could with lower infection rates, and now “we’re doing good just to call the people that test positive.”

DuFrayne said OHRH was not near their bed capacity, and that the more limiting factor is staff availability. He said after the last 20 months, team members and staff were simply tired and that there was a shortage of staff like in many industries currently.