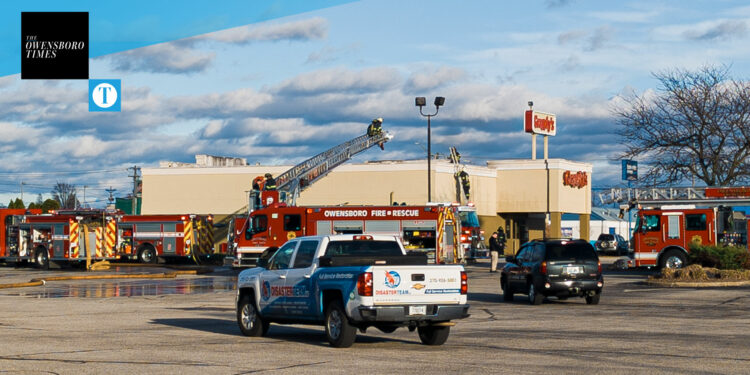 4 p.m.: All inside were able to leave the facility before the fire department arrived. Fire Chief James Howard said Engine 5 was able to see smoke before arriving.

The fire was put out in about 20 minutes and is assumed to be a cooking fire. However, OFD is still on scene checking everything to make sure they determine the source.

One person was being treated but “does not have any serious injuries,” according to Howard.

“Glad that it wasn’t anything more serious especially before the holidays,” Howard said.

Damage to the building is still be determined as well.

The Owensboro Fire Department is responding to a structure fire at Grandy’s restaurant on Frederica Street. OFD crews along with Owensboro Police Department and AMR Ambulance arrived to the fire, first reported at 2:49 p.m., to find flames coming through the roof.

The Owensboro Times reporter on scene says the smoke has died down.

This story is developing and will be updated.