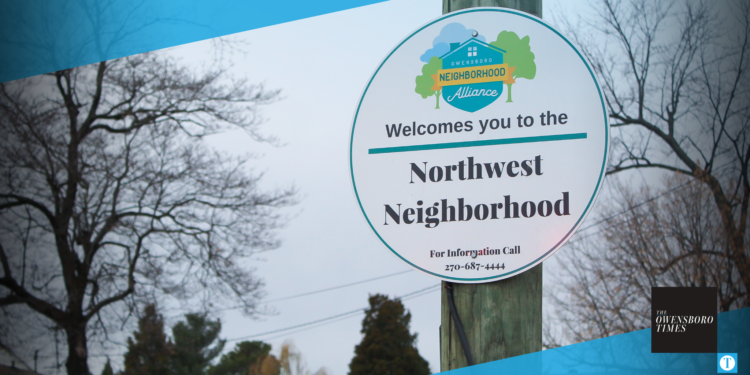 The City of Owensboro has narrowed the list of new names for the Northwest Neighborhood to five choices, and a public poll is open now to help make the decision. While Neighborhood Alliance chairperson Rafe Buckner understands the historical motives behind the project, he has some worry that a new name would absorb or hide the history of Baptist Town.

The poll can, which can be completed here, has five names from which to choose: Riverview, Dublin Village, Riverview Run, The Distillery Quarter, and The Distillery District.

The Northwest NRSA is generally bounded on the north by the municipal limits, Ohio River, West First Street, Ebach Street and Schroth Street; on the south by the north side of 5th Street; on the east by Walnut Street; and on the west by Ewing Road and Texas Avenue.

The NRSA area encompasses about 367 acres of land with about 69% residential area including 25 defined residential neighborhoods including Chesterfield Court Addition, Paradise Garden and — most importantly to Buckner — Baptist Town Estates.

Buckner said he understands the significance of the distillery in Owensboro’s history.

“I do understand if they’re wanting to rename [the distillery area], I get it. But if you’re wanting to take Fifth, Fourth, Third — those are Baptist Town neighborhoods. I don’t know,” Buckner said.

Buckner said since he has lived in Owensboro he hasn’t known the area to be called by anything other than Baptist Town.

One renaming option pays homage to the culture of those that have lived in the neighborhood: Dublin Village.

The name is a reference to the namesake of the village that Irish immigrants made when they settled in the area in the late 1840s. To Buckner, that name is a great title, but for the area closer to Dublin Lane around English Park.

The Northwest Alliance was planning to create signage promoting Baptist Town. It would sit on the property of Fourth Street Baptist Church and would welcome people to Baptist Town.

With the NRSA, he feels that some parts of the neighborhood may be incorporated and absorbed into a history that isn’t their own.

Buckner understands that change and progression is something natural, but feels this is different.

“I’m mindful of progress and change. I know nothing stays the same and change is kind of inevitable,” Buckner said. “But this is one thing that I have to stand on, we got to preserve Baptist Town history.”