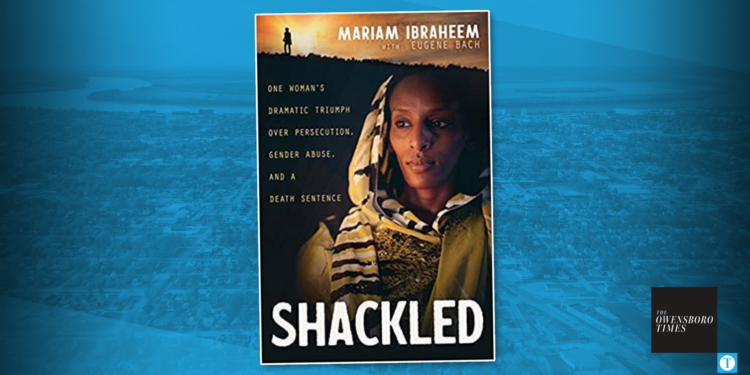 Bellevue Baptist Church will host an event next month with guest speaker Mariam Ibraheem, a Sudanese religious freedom activist and public speaker. While 8 months pregnant, Ibraheem was once sentenced to death in her home country because of her Christian faith.

The event will be at 7 p.m. March 17 and will be an “interview-style” evening with Ibraheem and Eugene Bach, who co-authored the book Shackled with Ibraheem. The event is also part of the mission organization called Back To Jerusalem.

Editor’s note: This story below about Ibraheem and the upcoming event was first published in Kentucky Today and was written by Chip Hutcheson.

OWENSBORO, Ky. (KT) — Kentuckians will have a unique opportunity to hear a woman’s story of being sentenced to death in a Sudan prison rather than deny her faith in Christ. Mariam Ibraheem will recount her story in a question-and-answer format as part of a “Shackled” tour at Bellevue Baptist Church in Owensboro at 7 p.m. on March 17.

The event is free. The tour is an endeavor of Back to Jerusalem, an organization which facilitates missionaries in China and seeks to highlight the challenges and successes of ministry efforts in countries where religious liberty is opposed.

Peter Baehman, a Kentucky resident who is an ambassador for Back to Jerusalem, said the tour of speaking engagements is for Ibraheem and Eugene Bach, a missionary who helped Ibraheem write her story for a book entitled “Shackled.”

“She will share her story, some of her struggles, and some of the things that have been miraculous,” said Baehman, noting the Shackled tour is resuming after being sidelined the past two years because of COVID. The Owensboro stop is the only one scheduled in Kentucky.

At the Owensboro event, Ibraheem will tell her story of living under Sharia law, of being sentenced to 100 lashes and death for being a Christian. She spent six months in the horrid conditions of a Sudanese prison, but was released in 2014 and now lives in the U.S. following efforts on her behalf by the U.S. and Italian governments.

“She is an example of courage,” said Tony Perkins, president of Family Research Council, which was involved in efforts to free her. “She was 27 years old and refused to deny her faith in Jesus Christ.”

In 2013, she was charged with apostasy for not accepting the Islam religion. She had a Muslim father, so by law was considered a Muslim. But she was reared as a Christian because of her mother. Under Sharia law, a Muslim girl must marry a Muslim man, while a Muslim man has no such restriction. In countries controlled by Sharia law, women are considered to be weak. She illustrates that reality by saying when Muslim women are involved in traffic accidents, onlookers bring buckets of water to the scene to be thrown on the women before exiting the vehicle, because they believe the women have urinated on themselves.

When imprisoned, she had a 1-year-old child and was eight months pregnant with her second child. She was shackled by heavy chains around her ankles — a customary practice for all prisoners awaiting execution — and her child was in the prison cell with her. While shackled, she gave birth in prison to a daughter.

She tells how a Bible was smuggled to her in prison. “That’s what gave me courage in that time,” she said. “I was not allowed paper or pen, and they would search everywhere, even a child’s diaper.” The Bible was smuggled to a guard, and then to a Muslim girl who hid it for her. “They hit me, spit on me, called me unclean. But I am not a bad person, I am who God says I am,” she was quoted as saying.

During her pregnancy, she was given one meal a day. She responded to prison officials in ways “to make them think I had some kind of mental issues. I didn’t complain, so they thought I had serious mental problems.

“There were so many times I felt so much peace. I felt the prayers of so many people. God had a purpose for me — that is why I survived.”

Ibraheem’s story details the hardships for women, Christians and children growing up in a nation ruled by Sharia law.

Also at the event, Bach will share about the work and vision of Back to Jerusalem, informing people “about the incredible things God is doing with the army of Chinese missionaries going into the darkest areas of the world,” according to the organization’s website. Bach, who served in the U.S. Marine Corps, said Ibraheem “is one of the toughest women I have ever met.”

In his ministry in China, Bach said one thing he has noticed is that the country “is having the world’s largest revival.” He added that “persecution leads to revival.”

Churches who anticipate bringing a group to the event are asked to contact Danny Gray, Bellevue Missions, at 270-993-3193 to help with seating accommodations.