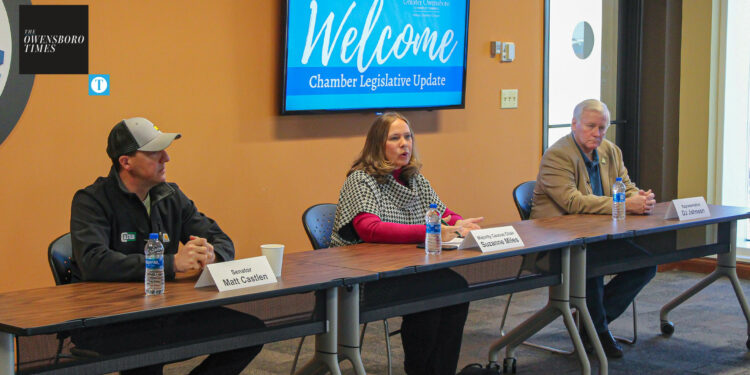 State Representative DJ Johnson said he is forming a bill with nine additions majority of family court judges and nine deletions majority of circuit judges throughout the state. With this plan, it’s intended to give Daviess County and other counties one extra Family Court judge while alleviating counties that do not have as burdensome of a load.

If the bill were to pass, the new judges would be brought on effective January 2023, meaning a filing deadline in August, an election in November, and a start date in January 2023. Meanwhile, the deletions in parts of the Commonwealth will not go into effect until January of 2027.

Then after 2027, when the deletions take place, what was once $3 million is now $5 million.

“That’s significant; that’s right out of the general fund and someplace else that thought they were going to get money suffers because of that,” Johnson said. “But across this state, and particularly here in Daviess County, the Family Court Judge, it’s become obvious that we need those.”

Majority Caucus Chair Suzanne Miles said that she is working with Owensboro Health and Owensboro Community & Technical College to create a mecca of nursing students to help with the shortage of nurses in the medical field.

Miles said that nine institutions want to join the program to help as of right now.

With this in mind, she has been emphasizing the importance of receiving one-time monies from the federal level to ignite systems and programs that will be sustainable moving forward.

“I’ve made it very clear the amount of money that I’m requesting for this healthcare situation, and I have been very specific,” Miles said. “This is one time that we get to help people get started so that they can flourish and deliver.”

State Senator Matt Castlen said he is also working hard to continue the initiative and push the bill forward.

Additionally, Miles, Castlen, and Johnson said that with the passage of House Bill 8, they are working toward getting to a 0% state income personal tax.

The Bill lowered a tax rate of 5% to 4%, which eventually is hoping to be reduced to 0% when possible — Miles believes the state could be zero-based within six years.

Miles said the House has been cautious about adding additional expenses to the tax reform, and as of right now, funding for all-day child care is one of the initiatives they are slow to approve.

Through work with the Prichard Committee, she said they are researching how the independent child care businesses are treated versus public education. Ultimately, the decision to not rapidly approve the all-day child care falls on ensuring that the childcare isn’t burdened with obstacles that are not a benefit to a child’s health, safety, and development.

When referencing the city’s infrastructure, Castlen said that the money had recently gotten the governor’s recommendation, and they’ve just recently started going through the work.

Castlen said projects like the bridge crossing from Cincinnati to Northern Kentucky are significant drivers of economic growth for the state and thus will benefit the state when it comes to making funding choices.

“I think you’ll see certain items that are important to a lot of districts across Kentucky might get onto that list to invest in the future of our state,” Castlen said.

Johnson said that whatever influence he has in the process will promote efforts to allocate money to the local county and city levels. He noted that repaving South Frederica is scheduled right now and that he’s trying to expedite that process further.

“A couple of people in the audience asked the question about when we can repave South Frederica; it’s scheduled, but seriously I’m trying to see if we can move that schedule up a little bit,” Johnson said. “But there’s a pretty solid schedule in place on that.”

Castlen said that when it comes to ensuring that Owensboro-Daviess County remains with a seat at the table in conversations, the area is in a good position with himself being one of the only senators serving on the Appropriation and Revenue Committee and Miles being Majority Caucus Chair.

“[Especially on infrastructure], we’re in a very good position,” Miles said. “Luckily, they’ve done an excellent job of prioritizing and making sure that we’re aware of that.”