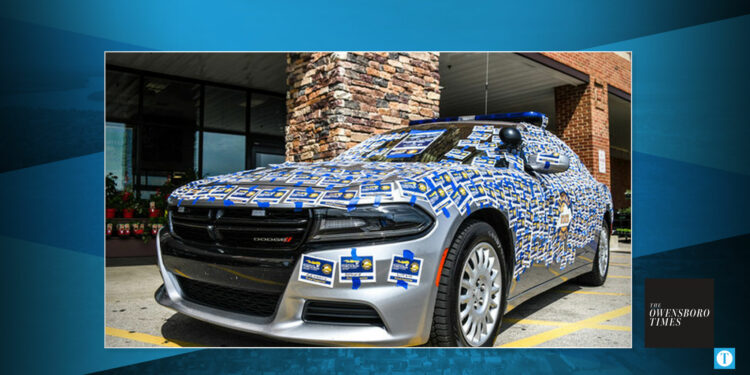 The Kentucky State Police is again showing their support of Special Olympics Kentucky (SOKY) by hosting the “Cover the Cruiser” fundraising event at locations across the commonwealth, including Owensboro. KSP encourages residents to cover the cruisers with custom SOKY stickers for a minimum donation of $1, which will go directly to SOKY.

This fundraising event began in 2020 when the annual Special Olympics Law Enforcement Torch Run was canceled in response to the coronavirus pandemic. During the Torch Run, law enforcement members carry the Flame of Hope into the Special Olympic games. The flame represents courage and celebration of diversity.

“The money that KSP has raised in the first two years of ‘Cover the Cruiser’ has provided valuable sports and health services for our athletes, while also affording a unique way for people to get to know KSP while they support Special Olympics athletes across the state,” Mazzoni said.

For more information about the ‘Cover the Cruiser’ campaign or to make a tax-deductible donation, visit soky.org/coverthecruiser/.

Special Olympics is the world’s largest sports training program and competition for children and adults with intellectual disabilities. The organization has been serving the needs of our athletes and their families since 1970 and welcomes 11,300 athletes in Kentucky.