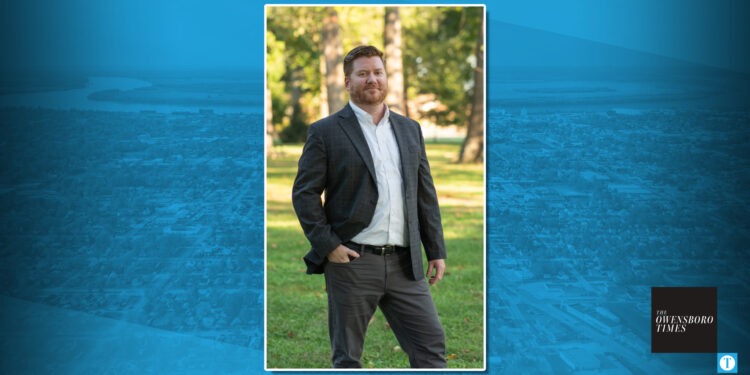 John Burlew will be the next Daviess County Attorney after his lone opponent, Nick Goetz, decided to withdraw from the race. Burlew, currently the Assistant County Attorney, said one of his primary focuses will involve addressing the rise in crime and being tougher on violent and repeat offenders.

Burlew was the lone Republican candidate running for County Attorney while Goetz was the only Democrat, so there was no primary for that race. Goetz first announced his withdrawal Saturday, which is how Burlew found out.

“I was a bit surprised, but I guess you could say also excited that my only opponent isn’t gonna be there,” Burlew said. “I wish Nick the best. I’ve known him a long time. We’re part of different political parties, but I think he’s a good lawyer and wish him the best.”

Burlew said it’s important to note that the County Attorney has several responsibilities other than just prosecuting crimes — such as serving as the legal adviser to Fiscal Court, as well as collecting child support and unpaid county taxes. The office has a civil, criminal, and child support division.

The office is also responsible for prosecuting all juvenile cases — including dependency, neglect and abuse cases. Burlew noted that one way to address drug use is through the juvenile drug court that’s run by the County Attorney’s office.

“I would like to get more participants in that,” he said. “For young people that are suffering from substance abuse, we need to get them in that program and try to get them off.”

In addressing crime and punishments, Burlew said he plans to really crack down on violent and repeat offenders.

“I’m probably going to be a little tougher on crime than what the office is used to in the past,” he said. “I think that’s needed. I think, to some extent, we’ve lost sight of the punishment aspect of the justice system. And I think that needs to be sort of reintroduced, just to show people that there’s consequences to your actions. I’m not going to have a lot of tolerance for violent or repeat offenders. I think the community is kind of yearning for that.”

However, Burlew also noted that the County Attorney’s office only deals with felonies in their initial stages. Felony cases eventually end up in circuit court, where they are then handled by Commonwealth Attorney Bruce Kuegel’s office.

“Where the County Attorney’s office does have an impact in those cases are the initial stages, and that’s where you’re talking about bonds and pretrial release,” Burlew said. “I can tell you that my office is not going to agree to a reduction in bonds for violent offenders. I think there’s exceptions to probably everything, but unless there’s, big-time circumstances, I’m just not gonna do it anymore.”

Burlew said he understands the job will be tough and he’ll essentially be on call 24 hours a day, but he wants to serve the community.

“I love this community, this is my home, and I want to continue to serve it,” he said. “The rise in violent crime is alarming to me — and I can tell you, as I’ve said during my campaign, my office will be tough on violent offenders and repeat offenders. I have the requisite experience to take on this position having been a prosecutor for 13 years, and I’m excited to start working for the citizens next January.  I think I can bring some welcome change to this position, and I plan to do that.”

Goetz said his decision to withdraw came after careful consideration and lengthy discussions with his family.

“I’ve decided to withdraw from the race for Daviess County Attorney in order to focus on the growing needs of my private practice,” he said. “… Despite the difficult but necessary decision to no longer pursue this office, I remain concerned about the direction of the Daviess County Attorney’s office. I launched my campaign because I care deeply about this community and do not want to see the issues of violent crime and addiction continue to harm it. I hope our next County Attorney will address those issues with conviction, compassion, and a sense of urgency.”