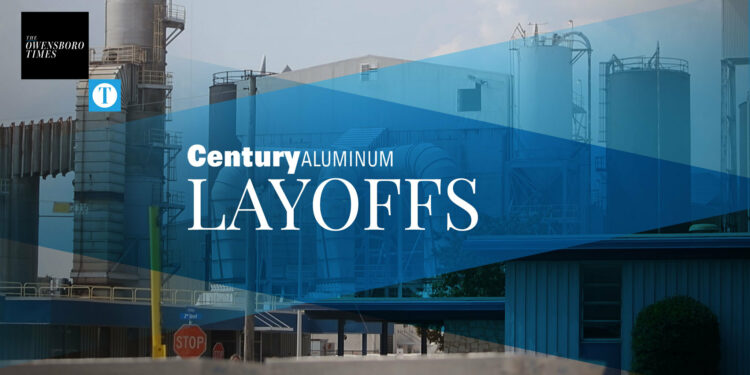 Century Aluminum will be laying off 628 Hawesville Smelter employees and fully curtailing operations for 9-12 months, according to a letter sent out by the company Wednesday. They cited an “unprecedented rise in global energy prices.”

Layoffs will begin the week of Aug. 5 and be completed by Aug. 12. Employees who laid off less than 60 days from the date of the notice will be paid the difference in accordance with the WARN Act, according to the letter.

Century officials could not immediately be reached. Owensboro Times has also reached out to union officials.

The letter that was sent out reads as follows:

In order to continue to operate its smelter located at 1627 State Route 3543, Hawesville, Kentucky (the “Hawesville Smelter”), Century Aluminum of Kentucky GP (“Century” or the “Company”) must be able to purchase reliable, affordable electric power. Unfortunately, an unprecedented rise in global energy prices arising from the Russian war in Ukraine has dramatically increased the price of energy in the U.S. and around the globe. The cost required to run our Hawesville, KY, facility has more than tripled the historical average in a very short period. Given these circumstances it is necessary to fully curtail operations for a period of approximately nine to twelve months at Hawesville until energy prices return to more normalized levels. This is expected to result in the layoff of 628 Hawesville Smelter employees, including 504 employees represented by the United Steel, Paper and Forestry, Rubber, Manufacturing, Energy, Allied Industrial Service Workers Union, AFL-CIO(*USW”).

The Company intends to begin the curtailment process immediately, and at the same time, prepare the facility for a restart when energy prices stabilize. We expect that employees will begin to be laid off the week of August 5, 2022, and it is currently anticipated that all of the layoffs will be completed by August 20, 2022. The specific schedule of the layoffs will be determined based on the progress of the curtailment process described above. To the extent that employees are laid off less than 60 days from the date of this notice, they will be paid the difference in accordance with the WARN Act. All layoffs of employees represented by the USW will be conducted in accordance with the collective bargaining agreement currently in effect between Century and the USW. As such, some US W-represented employees may have bidding or bumping rights as set forth in the collective bargaining agreement. At this time, it is expected that these layoffs will be temporary, but the Company expects that the layoffs will be for nine to twelve months, When the Company’s anticipated energy costs return to a level that makes the Smelter economically viable, the Company plans to restore manufacturing operations at the Hawesville Smelter up to previous levels.

Should circumstances change any of the Company’s plans with respect to these layoffs, I will provide the USW with additional information regarding the impact on employment levels at the Hawesville Smelter.

If you have any questions concerning this WARN Act notice or the layoff, you may contact Tamara Clark at 1627 State Route 3543, Hawesville, Kentucky 42348, telephone number 270-852-2294 for further information. In addition, information concerning the layoff will be provided in the coming days.

Century is one of just a handful of aluminum smelters left in the United States and the only high-purity smelter in the world. Hawesville is Century’s largest U.S. smelter and is the largest producer of high-purity primary aluminum in North America. Four of Hawesville’s five potlines are capable of producing high-purity aluminum, which supports the United States’ national security efforts and is used in defense applications such as the F16, Airbus, Naval war vessels, 747 airplanes and the International Space Station.

Extreme layoffs in 2015 due to the collapse in the aluminum price meant hundreds lost their jobs.

In 2018, citing national defense, the Donald Trump administration created tariffs for foreign imports of steel and aluminum. With the 10% tariff on aluminum, the metal was more expensive to import from other countries, therefore creating more demand for aluminum from American smelters like Century.

Officials at the time said after those tariffs were put in place, aluminum production in the U.S. increased 60 percent from 2017 levels. Century was then able to reopen two of three decommissioned potlines in 2019 due to the higher demand.