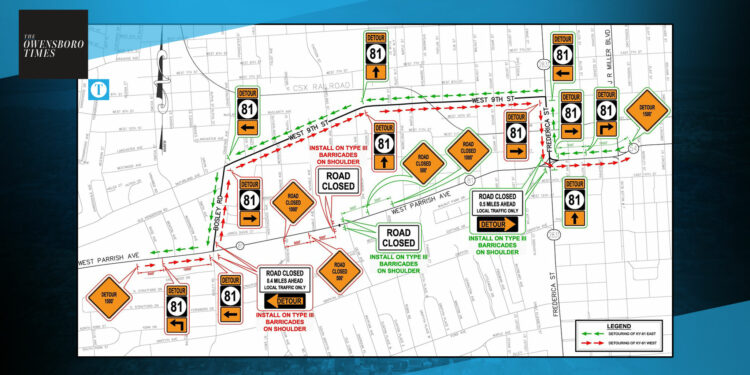 A well-traveled portion of West Parrish Avenue will be closed for two weeks starting Monday. Owensboro Catholic School is addressing a drainage issue by installing two pipes under the road, according to the Kentucky Transportation Cabinet.

The work is scheduled to begin on June 27, and a detour will be placed around the work for the two weeks of the construction.

While the project is aimed to help Owensboro Catholic High Schools’ drainage issue Keirsten Jaggers with KYTC said it is also to help the city’s drainage issue as a whole.

“Typically we do not permit private drainage systems on the right of way however this project was supported by the city and they have assumed ownership and maintenance responsibility after construction,” Jaggers said.

While only a small section of the road will actually be totally closed near the school, the detour will take the traffic onto Bosley Road and West 9th Street.

Once the infrastructure is in place, the City of Owensboro will own and maintain the structure.

Home » News » Portion of West Parrish closing next week for construction; detour will be on West 9th Street