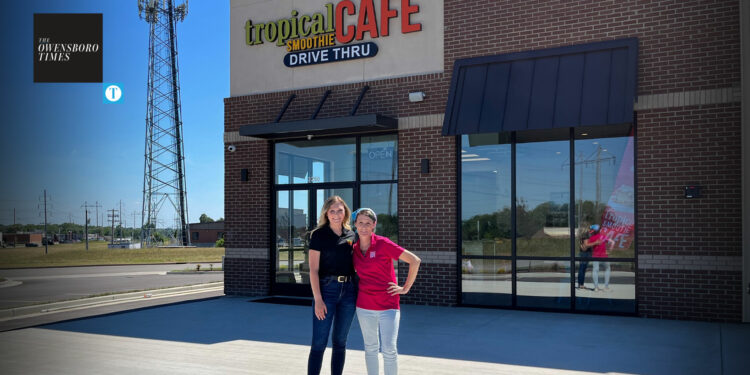 Tropical Smoothie Cafe’s new location in the Gateway Commons will open Tuesday. It marks the second location in Owensboro for the health-minded restaurant, which also has a spot on Frederica Street in the Wesleyan Park Plaza area.

The new location is at the end of a three-unit building at 3250 Hayden Road, next to Malco Theatre.

Both Owensboro locations are owned by 4 Cats LLC. Partner Sean Byrne said he’s excited about the new spot and thinks it’s an excellent location to serve the community.

“This is a great place to serve people,” he said. “A lot of people don’t realize how good the food is – it’s clean, crisp, and nothing is fried. We have several repeat customers.”

Byrne said the new Owensboro location will nearly be identical to the first one, including having a drive-thru.

The menu will also be the same, and it’s something Byrne takes pride in. He noted the smoothies are made with real fruit, and that the restaurant also has a menu beyond smoothies — offering wraps, flatbreads, quesadillas, and more.

He’s also excited to promote Murphy Riney to General Manager. Riney has been an active team member since Byrne and his group first opened Donatos.

“We’re really proud that she started in our organization as a Donatos team member and is now able to serve as a general manager,” Byrne said. “We’re proud of our ability to grow and advance quality talent.”