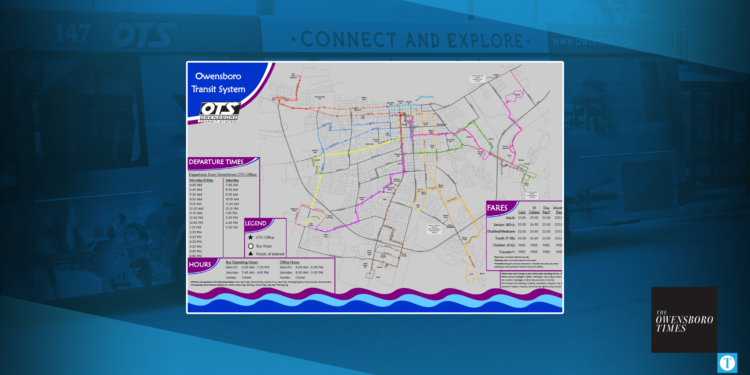 Owensboro Transit System bus route changes and modifications will officially take effect Monday, with officials saying it will allow for faster and more efficient service for OTS riders. Among the changes, three new transfer stops will be added to save time and money between route transfers. The routes will also be run bi-directionally to cut down on the amount of time between pickups. Two routes will be discontinued.

The new stops will be at the Goodwill on Starlite Drive, Airpark Drive, and Alvey Park Drive East.

For a complete list of all the changes, see below or pick up one of the new maps from the Transit Office.

• Will serve the Bon Harbor Post Office in both directions

• Will service the Airpark Drive

• Will provide a transfer bus stop on Airpark Drive

• Towne Square Mall will no longer be served

• Taco Bell will no longer be served

• Additional coverage to neighborhood along Fairfax Drive and Jefferson Street

• Will serve VA Clinic on an as needed basis

• Will provide service to the Daviess County Detention Center as needed

• Will provide service to Meijer’s via East Byers Ave.