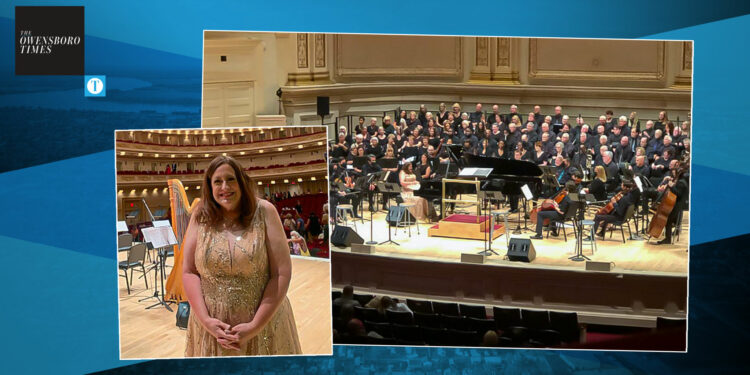 Dr. Diane Earle is bringing her most recent Carnegie Hall performance to Owensboro on Tuesday, when she’ll be a special guest at the Owensboro Symphony’s Jubilate: An Evening with Choral Masters.

There will be three identical recitals on Tuesday at 5, 6, and 7 p.m. For each of these, Earle will perform Liszt’s Concert Etude No. 3 and Chopin’s Grande Polonaise Brillante, Op. 22.

Earle will also be sharing some memorabilia of her trip to New York as well as fun stories from behind the scenes. In between each performance, attendees can chat with her and enjoy light refreshments.

These performances are free-of-charge but donations to support the educational programming of the Owensboro Symphony will be accepted. Seating is limited and will be available on a first-come, first-served basis.

Earle was at Carnegie Hall in early July, when she played two major piano solo pieces in addition to the piano parts for the orchestra over a 2-hour span.

“The audience response was really exciting,” Earle said of the experience. “I got a standing ovation and they seemed so appreciative and moved by it. That’s so inspiring when that happens.”

Her first invitation came in 2005 when composer John Steffa featured her and a few other musicians performing his music.

Since then, Earle has been invited to play solo piano, chamber music collaborative piano, and orchestral accompaniment. She has also taken the Kentucky Wesleyan Singers and the Owensboro Symphony Chorus combined with the Evansville Philharmonic Chorus.

This year’s invitation came from Mark Cabaniss, the composer for the world-premiere section of the concert, and Earle invited several community members to join her to sing in the choir for the performance.