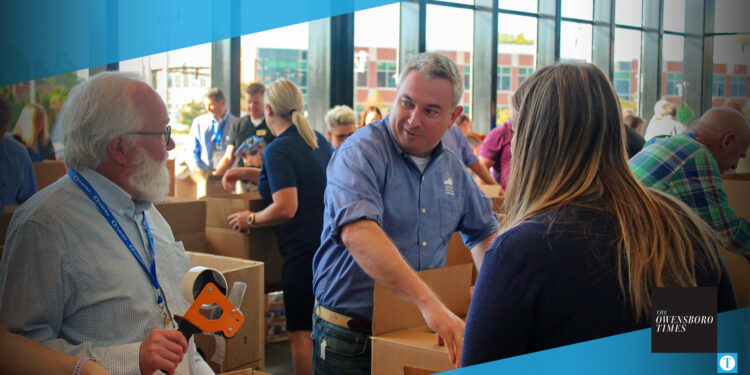 Kentucky Agriculture Commissioner Ryan Quarles helped members of the Kentucky League of Cities pack meals for the hungry Thursday morning at the Owensboro Convention Center. More than 500 boxes of nonperishable food were packed and delivered to food pantries in the Owensboro area.

Quarles, who is running for governor is 2023, said the meal packing event is an annual partnership between the Department of Agriculture and KLC, allowing local city officials to mix with statewide individuals to learn about food insecurity in the Commonwealth.

“A lot of people find it surprising that 1 in 7 Kentuckians and 1 in 5 school children suffer from food insecurity,” Quarles said. “So packing events like this not only help put food in the hands of those who need it, but it reminds policymakers that we need to do a better job of taking care of fellow Kentuckians.”

Quarles said inflation has also taken a toll on food insecurity, noting that events like this showcase how people can help make sure their communities don’t suffer from hunger.

The state Ag Department started the Kentucky Hunger Initiative in 2016, and since then they’ve been able to utilize the services and resources with a long list after experiencing the pandemic, the tornado destruction in southwestern Kentucky, and the flooding in eastern Kentucky.

“We’re proud of the work that we’ve done to help build up the capacity, but it’s also been great to see the generosity of Kentucky agriculture,” Quarles said.

Quarles said ahead of the holiday season he encourages families throughout the Commonwealth to do three things to help stop hunger in the state.