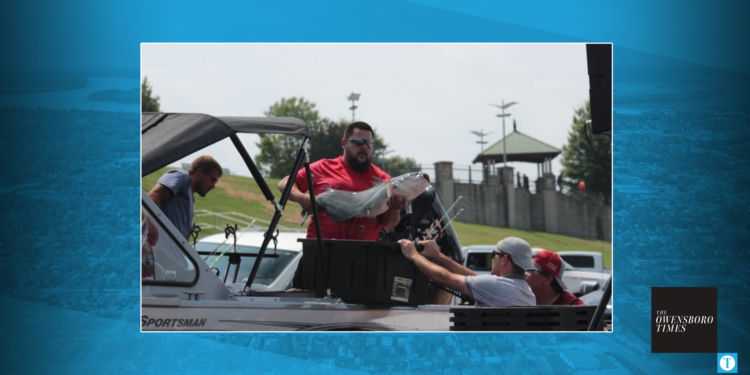 Local Kentucky anglers will look to avenge themselves Saturday against cross-river rival Indiana in the second annual Rumble on the River Catfish tournament.

The event serves as a fundraiser for Friends of Sinners, a local nonprofit substance recovery program. Damian Clark is an alumnus of the program and organizes the event with his long-time friend and Hoosier Jeremy Farrar.

“There’s a lot of pride on the line – the guys from Indiana aren’t even speaking to me right now,” Clark said. “It’s definitely fun and competitive, but the ultimate prize is raising money for Friends of Sinners.”

The Indiana squad took the victory last year, forcing Clark to take a skipjack pie to face. Skipjack is in the tuna family — and as nasty as that sounds, it fails in comparison to this year’s ante.

“Whoever loses this year has to get a tattoo of the opponent’s state, and I certainly don’t want to lose that bet,” he said. “Indiana really shows up, so we will definitely have our hands full.”

Indiana has 33 boats pre-registered, while Kentucky has 22; that’s already significantly more than last year, and Clark anticipates several more will register this weekend. Last year’s event raised $10,000, and he’s hoping to exceed that number this year.

The event also features a post-tournament dinner and auction. Anyone is welcome to join in on the fun and donate to the cause.

Clark said it wouldn’t be uncommon for anglers to bring 60- to 80-pound catfish to the scale.

“This event keeps growing every year, and everyone says it’s the most fun event of the year,” he said. “Friends of Sinners helped me to reintegrate into the community and gave me a chance at success. I now own my own business and do what I love. Giving back to Friends of Sinners is a passion of mine.”