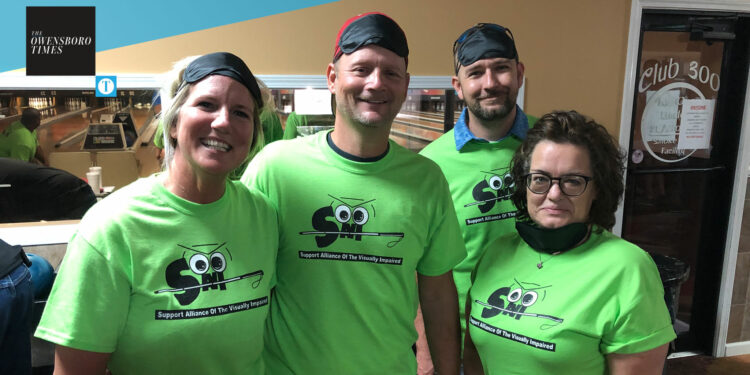 The Support Alliance of the Visually Impaired (SAVI) is excited for the return of Blindfold Bowling Night on October 1 and 2 at Southern Lanes. The local nonprofit supports visually impaired adults and their families in Owensboro and surrounding communities.

SAVI first introduced the Blindfold Bowling tournament in 2019 after a member experienced a similar event in Louisville. The local group took the idea and ran with it, experiencing massive success in its first year, only to postpone the event in 2020 and 2021 because of the pandemic.

“The event’s purpose is to let people understand what it’s like to be blind,” said SAVI executive director Sheryll Lott. “People find out how tough it is; these struggles are a reality for us. All-in-all, it’s a great time.”

Participants blindfold themselves before rolling the ball. They then take the ball in one hand and grab a rail with the other hand to guide themselves to the beginning of the lane.

Lott said the event also serves as a fundraiser for the organization, which relies strictly on donations and fundraisers to support its efforts.

“We have many friends in this community, and we are so excited about it,” she said. “We have a large host of prizes with several drawings over the weekend; there’s an opportunity for everyone to win.”

This year’s sponsors are the O’Bryan, Holly, Taylor group of Baird; the Lions Club; Blue Meridian Dive Center; the Owensboro Fire and Police departments; and Unifirst.

SAVI was established in 2014 as one of nine chapters under the Kentucky Council of the Blind. They are up to 37 members and meet on the second Tuesday of each month at Wesleyan Heights United Methodist Church.

To enter the tournament or inquire about sponsorships, contact Lott at 270-686-8689.