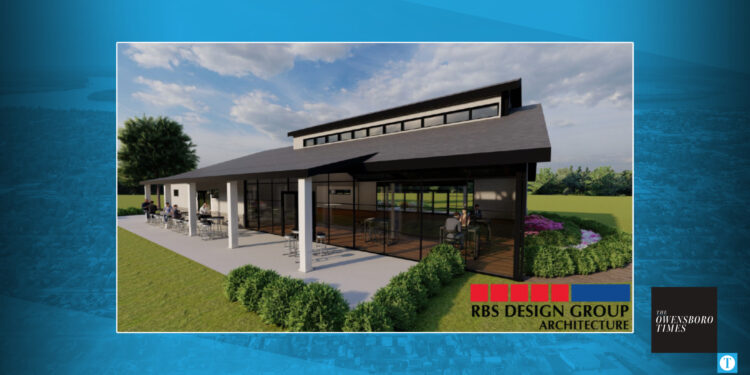 In an effort to bring in more visitors and tourists, the Western Kentucky Botanical Garden has announced plans for a $1.1 million event center that would provide more educational and event space. WKBG is in the midst of a $2.8 million capital campaign, and the event center is the final of three phases of capital improvements.

Laurna Strehl, WKBG executive director, said they began fundraising in late August 2021 and have reached $1.9 million in pledged funding. They have deposited over $1 million to date, with commitments to come in incrementally over the next 5 years.

Phase 3 involves adding the event center/pavilion, which has been designed by RBS Design Group. This final round of fundraising will be used to construct the event center.

Strehl said their indoor space is currently limited to 50 people, “and we want to increase that so we have more to offer.”

“That (would) generate income for the Garden, and it also brings awareness to the Garden,” Strehl said of a bigger, dedicated indoor space. “So that event space or pavilion is so important to us as this final phase of our campaign.”

Phase 1 involved purchasing the WeatherBerry home at 2731 West 2nd Street for $800,000 in September 2020. Strehl said they had to modify some of the building and property to satisfy planning and zoning requirements, including construction for (Americans with Disabilities Act) requirements.

“We improved the asphalt driveways and have added 33 parking spaces beside the home. We completed significant tree removal of unhealthy trees and some that interfered with asphalt expansion,” she said.

Phase 2 cost $900,000 and included hiring a landscape designer to plan and implement the expansion and integration of new gardens, utilizing a design focused on the way people use the Garden. Strehl said they created green spaces that promote interaction, including visitor features across the new eight acres of land, in addition to reserves for ongoing maintenance.

“We have nearly completed the ‘Path of Hope and Healing’ as part of Phase 2,” she said. “We hired a landscape designer for a master plan and rendering for the landscape at the entrance at 2nd Street. The granite sign has been constructed and is awaiting some landscaping to happen this fall.”

The Path of Hope and Healing is a 300-foot walkway lined with 12 glass ribbons that represent the 12 most common cancers in Kentucky. There’s also a 21-foot tall art sculpture of butterflies, the largest of which has a 10-foot wingspan.

Darrell Higginbotham and Marcia Carpenter are co-chairs of the Garden’s first ever capital campaign.

“The Western Kentucky Botanical Garden has endeavored to seek community investment in the growth and expansion of The Garden for the first time in our history,” Higginbotham said. “This unique opportunity is called The Pathway to Growth Capital Campaign. The pathway has been prepared and we are asking you to take the journey with us.”

Carpenter said, “There is something in each of us that longs for the tranquil healing power of nature. The Botanical Garden enhances the nature experience and contributes to quality of life and economic growth of the community.”

In addition to the capital campaign announcement Friday, two founding members of the Garden were permanently recognized. An ornate street sign was unveiled that honors Dr. Bill and Susie Tyler, who donated the original 8 acres of land that began the Botanical Garden in 1993.