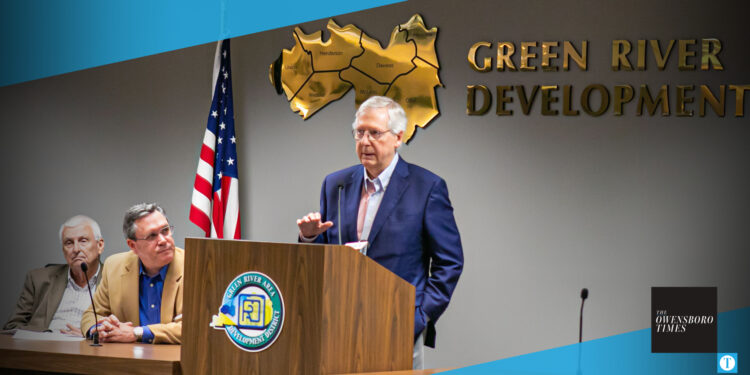 U.S. Sen. Mitch McConnell stopped in Owensboro on Wednesday to celebrate the  $17.3 million grant awarded to the Green River Area Development District to rehabilitate the Rockport Railroad Bridge that spans the Green River between Kentucky’s Ohio and Muhlenberg counties. McConnell also made very brief and general remarks about his hopes of Republicans retaking the House and Senate along with the top issues they’d focus on.

In September, the Department of Transportation awarded the $17.3 million grant as part of the Infrastructure for Rebuilding America (INFRA) program, which awards competitive grants for freight and highway projects.

Speaking Tuesday at the GRADD office in Owensboro, McConnell said the INFRA program is a result of the bipartisan infrastructure bill.

He added, “So what it means for Kentucky is about $6 billion … to deal with some of our major infrastructure problems. This particular bridge … is a tangible example of getting things fixed that need fixing. This is extremely, extremely important — not only for Ohio County but for this whole rail line going from Paducah up to Louisville.”

The current Rockport Bridge is over one hundred years old and serves as the Paducah & Louisville Railway’s main rail line in Ohio County, servicing more than 110,000 freight carloads annually. It forms a critical link in the supply chains that deliver military equipment to Fort Knox, coal to Louisville Gas & Electric, and raw materials to manufacturers all along the railroad’s 260-mile span.

The Green River Area Development District will use the grant announced today to rehabilitate the Rockport Railroad Bridge by replacing its deck, improving the approaches to the bridge, and upgrading the electrical and mechanical components that allow the bridge to rise and accommodate river traffic.

After his remarks about the grant, McConnell spent less than 2 minutes answering questions from media members.

He said he’s hoping Republicans can regain control of the Senate but he doesn’t know how things will shake out.

McConnell added, “It couldn’t be any closer. I think the country is tired of this administration. I hope they vote for change. And a change would mean flipping both the House and the Senate to the Republicans.”

Asked what the top priorities would be if Republicans to claim the majority, he said, “I think inflation, crime, and open borders are what’s driving the negative atmosphere toward the Democrats. If people are satisfied with the condition of the country, they can vote for the Democrats. If they feel we can do better and go in a different direction, they ought to vote for us.”

His response to the question of how Republicans would address those issues was, “Well, we’ll still have a Democrat in the White House. So we would hope the President would abandon this sort of left-wing position he’s been in for the first two years and come in our direction, and help us particularly fix the border and do something about this rampant epidemic of crime that’s going on in the country.”