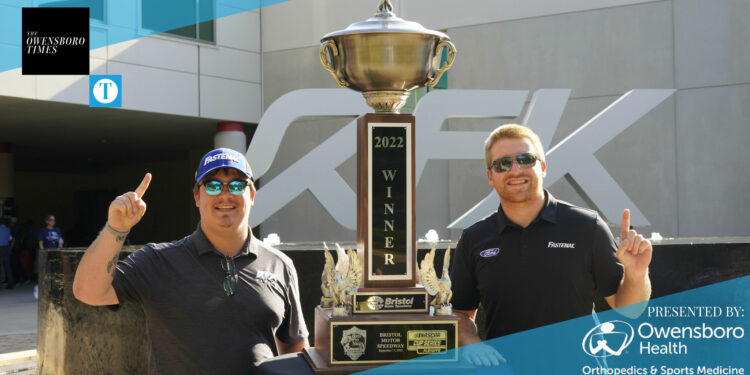 Trae Patton has been a NASCAR fan since he was in the womb. Now, he has his dream job as a Trackside Technical Support Engineer for RFK Racing/Roush Fenway Keselowski Racing.

“My love for the sport started before I was even born,” he said. “While my mom was pregnant with me, my brother was watching a NASCAR race on TV with my parents, and when Rusty Wallace was being shown on TV my brother said ‘There goes Trae Wallace.’ Well, my parents thought it was cute, so it stuck. When I was born, my first blanket was a checkered flag.”

As a Trackside IT Support Specialist, his role is to ensure that everything IT-related is up and running at all times during the course of the race weekend.

“From the time we unload the hauler to the time we pack up the hauler, it is my job to ensure that all of our equipment is functioning properly and ensuring that we have a network connection at all times,” Patton said. “While not at the racetrack, I work in the corporate office, where I work on projects, order and repair equipment, and make sure that everything is ready to go when it comes for us to head to the racetrack.”

Patton attended his first race in 2003 at Talladega for the EA Sports 500, where fellow Owensboro native Michael Waltrip took home the checkered flag. Since 2003, he has attended more than 65 NASCAR-sanctioned events.

Although ending up in NASCAR was the dream and goal, it wasn’t easy getting there.

Patton started working at McDonald’s right after he turned 16 and he worked there for nearly six years. While working at McDonald’s, he graduated from Daviess County High School and Owensboro Community & Technical College, where he received his Associate’s Degree in Computer & Information Technology.

Just after he graduated college, Patton landed his first IT job. But a few months later, COVID-19 hit and Patton found himself unemployed before going back to work at McDonald’s .

Upon returning to his high school job, he ultimately decided he was going to start the next chapter of his life and move to North Carolina to pursue his dream of working in the motorsports industry.

“During the years, I made connections through various social media platforms and through an online simulator called iRacing,” he said. “iRacing is an online platform that allows you to race online with people all across the world. I have made some of my best friends through iRacing and some of my connections in the motorsports industry itself.”

On Jan. 1, 2021, Patton packed his bags and moved to North Carolina. There he landed his first job in the motorsports industry by working for Pit Row TV, a broadcasting and media company that covered various racing series’ across the East Coast. Patton also worked his normal IT job during the week.

“Despite the odds held against me, I didn’t give up,” Patton said. “My whole life I was told ‘just give up,’ and ‘you won’t make it in NASCAR,’ and just about every other negative comment you could think of to crush someone’s dreams. I’m here to tell you, with enough hard work and dedication, dreams can and will come true.”

His advice to anyone who is trying to get into the sport is to not give up on yourself, no matter what anyone tells you.

“Make all the connections you can. Networking is very important in this industry,” he said. “Just follow your heart. If some random kid from Owensboro, Kentucky, can achieve his dream, what’s stopping you from achieving yours?”