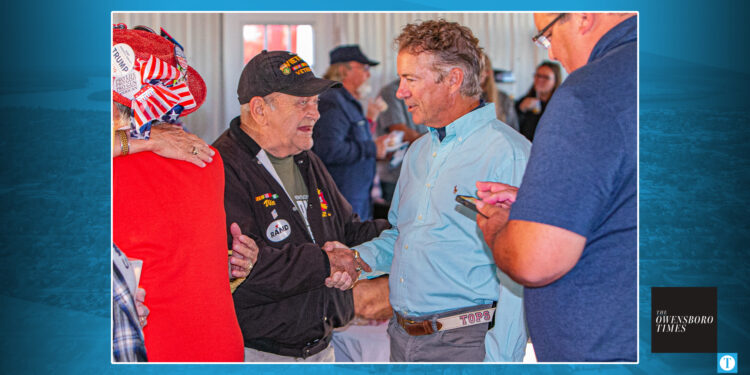 Rand Paul made a stop in Daviess County on Monday for a Republican rally. | Photo by Ryan Richardson

Kentucky Educational Television, Kentucky’s statewide public television network, invited Republican U.S. Sen. Rand Paul to debate Democratic challenger Charles Booker on Monday. Paul did not attend that forum, and instead made an appearance at a Republican rally in Daviess County. Paul spent most of his time speaking about the COVID-19 vaccine and criticizing Dr. Anthony Fauci, the CDC and Democrats. Other speakers at the rally included U.S. Rep. Brett Guthrie along with local candidates in the General Election.

It took just 10 seconds for Paul to mention Fauci. The duo have gained national attention for their public conflicts.

“They say a recession is when someone else loses their job. A depression is when you lose your job. A recovery is when Anthony Fauci loses his job,” Paul said.

Paul said he’s “been trying to send [Fauci] into retirement” and has legislation in committee to get rid of his position.

“He has too much power. His position should be divided into three positions,” Paul said. “But I’ll also go one step further. I think he’s lying to Congress. That’s a felony, and I’ve referred him to the Department of Justice for conviction.”

Paul spent the next few minutes claiming the virus came from a lab in China and further claimed Fauci has been lying about various aspects of the virus.

Paul then began talking about Democrats in the U.S. House, and specifically Rep. Nancy Pelosi, saying they are trying to force their beliefs on all Americans.

“Basically the philosophy of elitism is that they know better than you do. They know better what you should be allowed to take as far as what drugs you take, what can be prescribed to you, they know better,” Paul said. “It’s elitism at its very core. But the kind of elitism that has led to this is the same elitism that is the foundation of socialism. … But the thing is, as much as they say over and over ‘it’s a science, we’re following the science,’ they haven’t been following the science.”

Paul asked the crowd of nearly 200 people how many have had COVID, and the majority raised their hands.

“Virtually everybody. Shouldn’t you be told by your government whether that makes a difference, whether or not you have some immunity from having had the disease? This is a practical question,” he said.

Paul also said the lockdowns due to the pandemic “destroyed the economy. We’re still coming out from under that. We’ve got trillions and trillions of dollars of new debt that was added. When the Federal Reserve bought that debt, they created all of this new money, and that new money has flooded into the circulation. And that’s creating the inflation that we have.”

Before wrapping up, Paul said “the cloth masks do not block viruses at all. They are of absolutely no benefit.”

While Guthrie opened by saying he agreed with much of what Paul said, he added that it’s important to address what constituents can expect if Republicans take back the majority in Congress.

Guthrie addressed abortion, saying Pelosi put a bill on the House floor that said there can be no limit on abortion to the point of birth.

Guthrie said when Republicans tried to add an amendment stating that if the child breathes then it should get health care, only one Democrat voted in favor of the amendment.

Guthrie shifted to the border, largely pointing to the rise of fentanyl nationwide and saying there need to be more and harsher penalties for it’s sale and use.

Guthrie said Republicans have to hold strong to their issues and values and spread their message, while also being able to find common ground with those who have different ideas.

DJ Johnson is running for re-election to his seat as State Representative for the 13th District. He largely made general comments about the election and how important it was to get out and vote. He expressed support for the local Republican candidates.

State Rep. Suzanne Miles is running unopposed for re-election as representative for the 7th District. She did not make any remarks but served as emcee of the event.

Mark Castlen, Jeff Sanford, and Larry Maglinger are running for re-election as City Commissioners. Their race is nonpartisan but they are registered Republicans.

“It’s been a really big learning experience for me,” said Castlen, who is nearing the end of his first term as a commissioner. “I’ve enjoyed it quite a bit. It’s been a real pleasure getting to work with the mayor and other commissioners. I feel like we have the City moving in a direction that the majority of the people would like to see it going.

Sanford, seeking his sixth term overall, said “it’s not about me, it’s about you. It’s about serving you. It’s about serving the community. … As I look around the world, the state, and the country, I see moral decay. The reason I’m running is I want to be a good example for the church, for schools, for the community. I really think that leadership matters and I think experience matters, and I have examples of both.

Maglinger is seeking his third term as commissioner. “We’ve got a lot of work to do. I’m proud to be able to serve the city. It’s been a great experience. … I think out of the box. I think that we need to keep moving forward.”

Larry Conder, running for Central County Commissioner, said there is a “wave coming” but that it was still important for everyone to get out and vote.

“We cannot leave any doors open, no windows open, for anyone to even crawl through from the other side. It is up to you to get out and do that. Tell your friends that we want to make sure that it is red across the board, especially in this general election.”

Both candidates detailed their experience and credentials and ensure they would bring trust to the office.

Thompson said, “I’ve seen a lot of problems and struggles that the children and families of Daviess County have suffered through. I’ve talked with children, I’ve talked with men and women, and I’ve represented them and been their advocate. I understand the problems, and I’ve got some solutions. … We do need to restore the justice and integrity to our family court system.

Vallandingham said, “The next person that sits in this family court judge seat, their biggest task is going to be restoring faith and trust that the person sitting in that seat is doing things the right way for the right reasons every time, and that’s my promise that I can do. … I know the value of a blue collar upbringing and what it means to have strong Christian conservative values.”

Steve Nave, running for Central District Constable, talked for less than a minute and primarily introduced himself to the crowd.

Tim Hicks II is running for the Daviess County Board of Education 2nd District seat. The race is nonpartisan but Hicks is a registered Republican. Hicks said wants to make sure “there’s not going to be any kind of SEL or CRT” learning, meaning social-emotional learning and critical race theory.