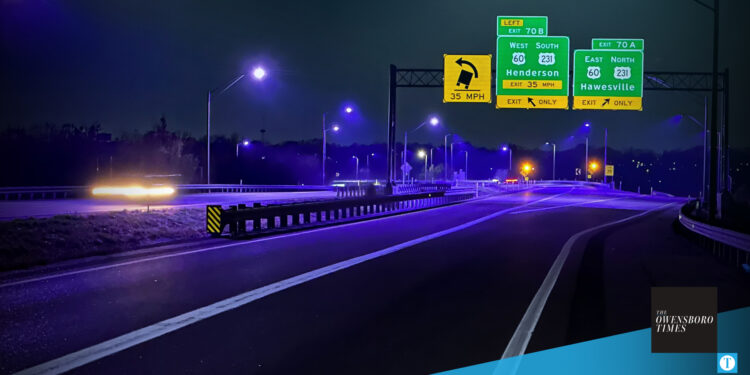 If you think you’re seeing purple at night, you’re probably right. Some of the street lights across the city are casting a purple tint due to what Owensboro Municipal Utilities officials said is a coating error by the manufacturer. OMU is seeking community input so they can replace the affected bulbs.

OMU Director of Delivery Austin McLimore said Owensboro isn’t the only city with the issue, and it’s actually a nationwide problem.

The bulbs were purchased in 2017-2019 and over the last several months many of them have begun to look purple. OMU said they will be systematically going through and replacing the bulbs, which are protected by warranty.

“We’re suspecting we have somewhere between 700-1,200 fixtures sporadically spread throughout the territory,” McLimore said.

OMU Communications and Public Relations Manager Sonya Dixon said that customers and community members can call OMU to get a light added to this list needing replacement. Dixon noted that it is beneficial to not only have the location but the number that is on the pole.

Due to the number of lights needed to be replaced, it may take up to 2 weeks before crews can get to a reported light. However, McLimore said once it’s at the top of the list, it’s a quick fix.