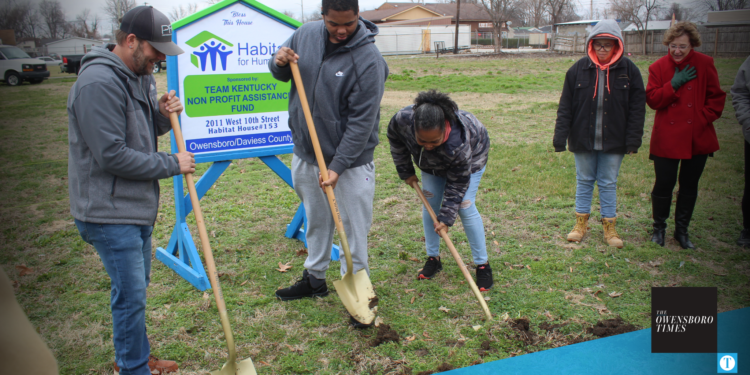 The local Habitat for Humanity chapter broke ground on two new homes Friday morning to kick off what will be a busy year of building for the organization.

Once complete, the two projects will bring the chapters number of builds to 154.

Home 153 on West 10th Street is going to Anita Riley and her son. The two have been working with Habitat for some time, so she said breaking ground on their own home has been a long time coming. Riley said the project means so much more than just having a new physical place to live.

“It means family. It’s where I get to celebrate and have family come over and have gatherings. It means a lot,” she said.

On Alexander Avenue, Home 154 is being built for Robbin Steward. Bubbling over with excitement Friday, she said this home will provide for her and her grandson.

“I’ve never had a brand new home so I don’t know what it’s like. And I get to pick out countertops and colors to paint, flooring and all that. It’s kind of overwhelming when I think about it,” she said.

“We gather as an organization with board members, volunteers, Habitat applicants, and the future homeowners and their families to celebrate the first step in building their house,” he said. “We then pray together in hopes everyone will stay safe in the process it takes to turn an empty lot into a house, and then finally into a home.”

In addition, Habitat hopes to break ground in July on a first-time homeowner training facility named in honor of former Director Virginia Braswell.