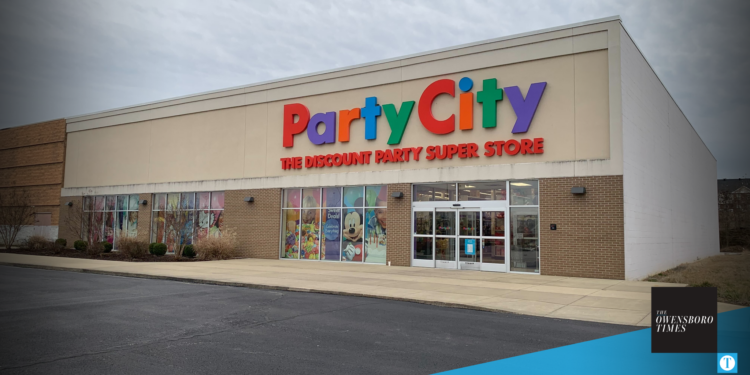 While their parent company has filed for Chapter 11 bankruptcy, Owensboro's Party City is remaining open — and while there was talk last year of a relocation, they aren't moving. | Photo by Ryan Richardson

The party won’t stop in Owensboro. While their parent company has filed for Chapter 11 bankruptcy, Owensboro’s Party City is remaining open — and while there was talk last year of a relocation, they aren’t moving.

A manager at the local store confirmed Tuesday their doors will remain open through the bankruptcy. Additionally, in 2022 it seemed Party City might be relocating after a “for lease” sign was seen hanging on the store; however, the manager confirmed that the store re-signed its lease.

Party City has over 850 stories nationwide and is the largest retailer of party goods in the United States. According to Forbes, the company was performing well financially prior to the pandemic “as the business grew and reached a revenue of about $2.35 billion in 2019.” Finances were affected by closures during the pandemic followed by record inflation, as well as steeper competition in recent years.

The company said in a recent release that it secured $150 million in financing that “will provide ample liquidity to support continued operations during the process.” A restructuring is expected to be completed in the second quarter of 2023.

In their release, Party City said the company is looking at converting stores to “next-generation prototypes,” evolving its Halloween City pop-up stores, and improving the online experience.

The company also said they still plan to operate as usual and maintain relationships with suppliers even while bankrupt.