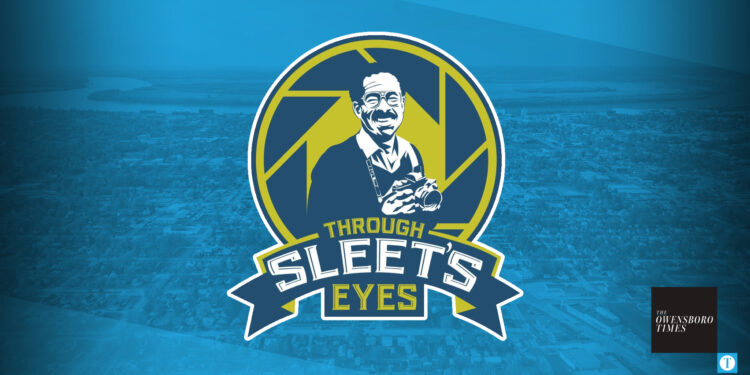 “Moneta Sleet Jr.’s story needs to be told,” says Emmy Woosley, chair of the Through Sleet’s Eyes Festival, just weeks ahead of the event that will be held in Owensboro to honor Sleet, who was the first Black person to win a Pulitzer Prize for Journalism.

Leadership Owensboro Class of 2021 wanted to give a gift to the community. Initially, it was a bronze sculpture of Sleet — and while that’s still on the table, they instead wanted to focus on educating the community of one of Owensboro’s most prolific figures.

The idea morphed into offering a “meaningful experience” for the community to enjoy with aspirations of inspiring hope and ambition.

All of the events for Through Sleet’s Eyes Festival, set for February 24-25, will be held at the RiverPark Center and are free to attend.

As a photojournalist for Ebony and Jet magazines along with other publications, Sleet toured the world taking photos of subjects ranging from Martin Luther King Jr. to Ethiopian Emperer Haile Selassie.

A gallery at the RiverPark Center will showcase nearly 40 years of history “through Sleet’s eyes.”

“It was a challenge to distill 40 years of his work into a meaningful exhibit. The goal was to capture the essence of this man from Owensboro, and Sleet’s images represent some of the most important moments of the 20th century,” said Bob Morris, former editor of the Messenger-Inquirer.

Ozier Muhammad worked alongside Sleet at Ebony magazine in the 1970s. Eventually, he went on to earn a Pulitzer of his own for his reporting in Africa. The story he will tell on February 24 spans his career and his friendship with Sleet.

There will also be a one-person show, Power of the Lens, performed both for the RiverPark Center’s Arts Teach Kids organization and the public. The show on Friday will be solely for the ATK program.

RPC Executive Director Rich Jorn described Power of the Lens as centering around educating oneself, educating the audience, and showing what it is like educating a classroom of Sleet’s accomplishments.

“We are so very excited to produce a play that not only explores the remarkable career of Owensboro’s very own Moneta Sleet Jr., but also the incredible influence his work still has on today’s society,” Jorn said. “His life’s work certainly made the world a better place and being able to share that story with our community is a huge responsibility and very much a blessing and an honor.”

Leading up to the Fesitval, Wonder Boy Media and Woosley partnered to produced a documentary about Sleet. They traveled the nation interviewing people who had a relationship with Sleet to discuss him and his legacy. While some of Sleet’s family may attend the festival, the documentary grants them the chance to tell the story of Sleet through a more personal lens.

“I am humbled to create this documentary and I am excited for the Sleet family,” said Drew Hardesty, owner of Wonder Boy Media. “More artists, journalists, photographers … everyone should know his story. Hopefully, this festival will inspire people of all ages to find their passion and lead lives just like Sleet.”

When designing the logo for the festival, Woosley said, the group contacted Larmarrous Shirley — an alum from Sleet’s alma mater of Kentucky State University Larmarrous Shirley and someone who was already familiar with the Sleet’s history.

The logo utilizes Western High School’s colors as a nod to Sleet’s high school experience. WHS was the segregated high school that Sleet graduated from in Owensboro.

More details about the festival will be released as the event draws nearer.