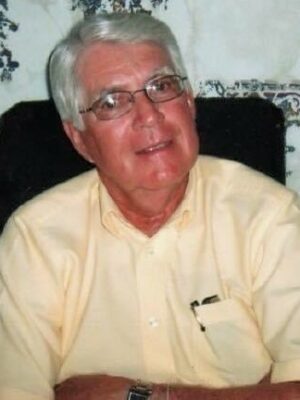 Gilbert E. Frank, age 84 of Harned, KY passed away May 11, 2022 at Breckinridge Memorial Hospital. He was born in Garfield, KY on July 2, 1937, son of the late Alfred and Edna Basham Frank. Gilbert was a member of Garfield Baptist Church. He was President of West Point Bank and retired in 2002 after 22 years in the banking industry. During this time, he was a member of the Kentucky Bankers Association. He served on the Board of Directors of West Point Bank until retiring in 2016. He served in the National Guard and Army Reserves for over 13 years. Prior to his banking career, he worked with Production Credit Association. Gilbert’s passion was farming and family time. Travel was another interest of his. He and Beverly made many trips around the United States enjoying the sites and time together.

In addition to his parents, he was preceded in death by children Dennis and Debra June Frank and his brother Harold D. Frank.

Gilbert is survived by his wife Beverly Frank of Harned, KY

4 grandchildren: Westin Brown, Hendrix, Brooks and Hadley Frank and Sophia Frank who is due to arrive in June.

Funeral services will be held at Trent-Dowell Funeral Home on Monday, May 16, 2022 at 11 AM with burial in the Locust Hill Cemetery. Visitation will be held on Sunday, 4-8 PM and Monday after 8:30 AM.

Expressions of sympathy are suggested to Locust Hill Cemetery.

To send flowers to the family or plant a tree in memory of Gilbert, please visit our floral store.