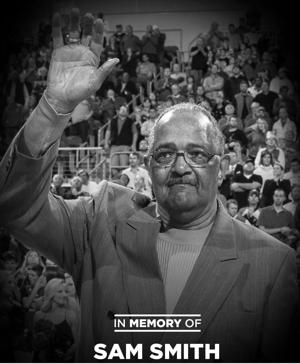 It is with great sadness that the Smith family announces the death of Samuel “Sam” Smith, 79. He passed away May 18, 2022, with his loving wife and devoted son by his side. He was born in Welch, West Virginia and later moved to Hazard. He attended Hazard High School and went on to pursue a college career in basketball with University of Louisville. He then went on to play professional basketball with the ABA. He married his wife of 56 years, Helen Ruth Smith and raised two beautiful children, Samuel Smith, Jr, and Nikki Fountain.

A 6’7” forward born in Welch, West Virginia, Sam played football and basketball for Hazard High School and became a Kentucky State basketball All-Star in 1962. Before turning professional, Sam became one of the first African American players to be recruited by the University of Louisville, along with Wade Houston and Eddie Whitehead. Smith was the first of the three players to start for the Cardinals and led the team in scoring his sophomore season. Sam subsequently transferred to Kentucky Wesleyan College, where he won the NCAA Division II championship in 1966, together with teammates George Tinsley and Dallas Thornton. In the final 15 seconds of that game, Sam scored a basket to break a 51-51 tie and give Kentucky Wesleyan the national championship victory. Sam received two all American selections during his college career and was named the all NCAA South Region Most Outstanding Player two times, and a member of the NCAA championship All-Tournament Team in 1967. After college, Sam was drafted by the Cincinnati Royals with the 28th pick of the 1967 NBA draft, but he signed to play with the Minnesota Muskies of the American Basketball Association instead. In his pro debut with the Muskies on October 22, 1967, Sam scored 24 points and grabbed 14 rebounds against the Kentucky Colonels. From 1967 to 1971, he played in the ABA as a member of the Muskies, Kentucky Colonels, and Utah Stars, playing with and against numerous future Naismith Hall of Fame players. He averaged 8.2 points and seven rebounds per game in his ABA career, and won a championship with the Stars in 1971.

He will be dearly missed. Rest in peace knowing your family loves you dearly.