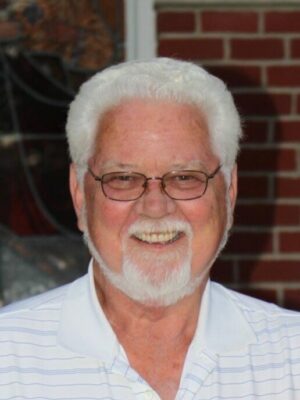 Rufus Martin Tivitt, husband, father, grandfather, great-grandfather, brother, uncle and friend passed away on June 23, 2022 at age 78. A lifelong resident of Breckinridge County, Rufus was one of six children born to Alfred Edward “Slim” and Mabel Roberts Tivitt on November 27, 1943.

Rufus was raised in Hardinsburg and some of his best memories were of growing up at the FFA Camp. In his youth, he was the “King” at the local roller skating rink and later in life would make sure his customers had the cleanest windshield you had ever seen. A volunteer firefighter in the 1970’s, Rufus spent his younger years as an auto body repairman and a truck driver for several companies before becoming a partner in operating C & R Tire and Service for 25+ years in Harned, KY. He was also a member of St. Romuald Catholic Church. Gathering for holiday meals with his family, spending time at the Shop with friends, taking a drive to Amish country (or anywhere for that matter), and making his delicious homemade banana ice cream were just a few of the simplest pleasures in life that brought Rufus immense joy. His cheeky personality and spirited language will not be forgotten. A special thanks to the staff at Breckinridge Memorial Nursing Facility and Dr. Ben Smith for their outstanding care.

Along with his parents, Rufus is preceded in death by his wife Betty Carroll Tivitt, brother Doug Tivitt, sister and brother-in-law Gracie and Don Driskell, brother-in-law Roger Burnette and mother and father-in-law Mary Alice and Jim Jarboe.

Rufus is survived by his four children and their spouses: Tena and Jesse Lucas of Hardinsburg, KY; R.M. and Cheri Tivitt of McQuady, KY; Shannon Tivitt of Louisville, KY and Blaine and Angel Tivitt of Vine Grove, KY.

Other surviving family include his siblings and in-laws: Tom and Jeanette Tivitt, Logan and Judy Tivitt, Anna Mildred Burnette, Paul and Monica Jarboe, Donnie and Isa Jarboe, Joe and Bettye Sue Jarboe, Jeanne and Dave Lee. He loved being Uncle Rupie to his many nieces and nephews as well.

Expressions of sympathy can be made to either “Pocket Full  of Hope”, a local nonprofit organization which helps local/hometown cancer patients like Rufus with ongoing expenses or to Breckinridge Memorial Nursing Facility in honor of their exceptional care.

To send flowers to the family or plant a tree in memory of Rufus Martin Tivitt, please visit our floral store.