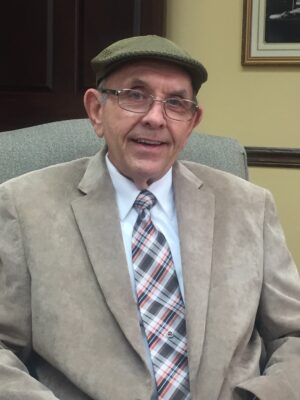 CENTRAL CITY – Jerry Lee Rowe, 79, passed away peacefully surrounded by his loved ones on Monday, August 1, 2022, at Greenville Nursing & Rehabilitation.  He was born on January 11, 1943, in Central City KY to the late Roy Lee and Audrey (Bowen) Rowe.

Jerry was a member of Richardson Chapel General Baptist Church, where he served faithfully as an ordained deacon of the Long Creek Association for over 40 years.  He also served the people of Muhlenberg County for over 37 years at the Central City Post Office and was a proud member of the American Postal Workers Union. After retirement, Jerry worked part-time at Auto Zone and was a volunteer at Muhlenberg Community Hospital.  He was also an avid craftsman and woodworker.

“Mush” was a 1961 graduate of Central City High School and cherished social gatherings and reunions with his classmates.  He was a fan of St. Louis Cardinals baseball, Lee University women’s basketball, and any team/activity with which his grandchildren and great-grandchildren were associated.  He loved his church, his family, his friends, and, above all, his Lord and Savior Jesus Christ.

Jerry was preceded in death by his parents; his sister, Linda (Rowe) Jamison; his beloved dog Buddy; and his wife of 29 years and lifelong friend, Mary Virginia (Yarbrough) Rowe.

The family expresses their appreciation to Jerry’s many caregivers from the Courtyard, Sparks Nursing Center, and Greenville Nursing & Rehabilitation, and Dr. Eric Bandy and Dr. Kristy Chappell for their compassionate care in recent years.

Funeral services will be held at 12 noon on Thursday, August 4, 2022, at Tucker Funeral Home in Central City with Pastor Justin Latham and Rev. Larry Shadowen officiating.  Visitation will be on Wednesday from 5 p.m. until 8 p.m. and on Thursday beginning at 8 a.m. at the funeral home.  Jerry will be laid to rest at Rose Hill Cemetery.

In lieu of flowers, contributions may be made to Gideons International to spread the word of God throughout the world.  Envelopes will be available at the funeral home. Online condolences can be made at www.tuckerfuneralhomes.com.