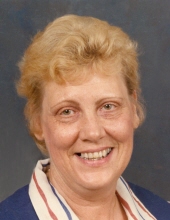 Bonnie Jean Brown, 90, of Owensboro passed away Sunday, September 18, 2022, at Hillcrest Nursing Home. She was born in Ohio County and the only child to Jack and Thelma Huff Newton of Roseville, KY. Bonnie was a tomboy who loved being with her dad in the fields where she learned to drive a tractor. At age 15 she met and married the love of her life, Gerald Brown of McLean County. At the age of 17, she went to work at GE and where she was employed for 10 yrs. She then attended school and became an LPN and worked at Hillcrest Nursing Home for four years. Bonnie then went back to school and became an RN and worked for and later retired from Our Lady of Mercy Hospital. She loved her job and prayed that she made a difference in this world.

Along with her parents, she was preceded in death by her husband, Gerald Brown; daughter-in-law, Mary Lea Brown; granddaughter, Ashley Brown, and great-grandson, Tyler Cecil.

Private family burial will be held at Roseville Cemetery. Cecil Funeral Home is in charge of arrangements.