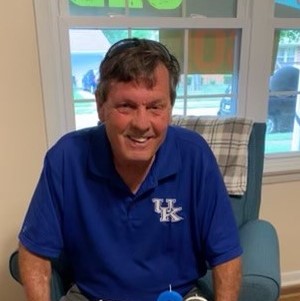 Perry Wayne Harney, 61, of Owensboro, Kentucky passed away September 21, 2022, at Owensboro Health Regional Hospital. He was born August 2, 1961, in Owensboro to the late William H. and Oma Dean Hester Harney. Perry worked as a delivery truck driver for Farm Boy and was a member of Immaculate Catholic Church, where he served in many capacities.

Perry was known for his yearly BBQ’s. He loved to sing; he had a beautiful voice. He enjoyed watching Nascar, Alabama football, and UK basketball. Perry was the former Vice President of WKEU Volleyball Club. He loved coaching his girls and was always their biggest fan. He also loved spending time with his grandchildren, his dog Flynn, and his grandpuppies. Perry was always there to put a smile on everyone’s face. He was always willing, there for everyone, and would give the shirt off his back to anyone that needed it.

Expressions of sympathy may take the form of charitable donations made payable to the Perry Wayne Harney Memorial Fund. Envelopes will be available at the funeral home.

Haley McGinnis Funeral Home & Crematory is both honored and privileged to be entrusted with the care of Mr. Harney. Leave your messages of condolence for the family of Perry Wayne Harney and sign his virtual guestbook at www.haleymcginnis.com.