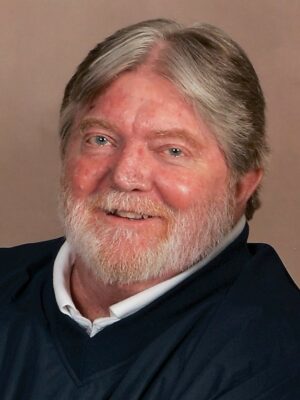 William Christopher “Chris” Aull, 68, of Owensboro, Kentucky, hurried through those Pearly Gates to hold his granddaughter, Emma Michelle Howard, on Tuesday, September 27, 2022. He was born May 10, 1954, in Owensboro, to the late William Guy Aull and Wanda Lou Gilbreath.

Along with his parents, he also joins his brother, Charles Patrick Aull; and many, many family members and friends who were there to greet his arrival.

Chris retired from Aleris (now Commonwealth Aluminum) in 2015 after 38 years of service, the last 15 years as the Union Safety Chairman. He truly enjoyed working with his co-workers and found some of his best lifelong friends.

Chris’s passion, other than his family, was classic rock music from the 70s and 80s, whether it was listening, singing, or playing along with one of his many guitars. We think he’s having a jam session with the Angels now that he can play and sing again.

He leaves behind his wife, of 47 years, Peggy; his eldest son, Nick (Jamie); his daughter, who will always be his baby girl, Carrie (Scotty Howard); his youngest son, Matthew; his brothers, Mike Aull and Steve Aull; and a large extended family of in-laws, aunts, uncles, nephews, nieces, and cousins.

Chris will have to watch from heaven his 2 grandchildren, Nico Aull and Shelby Aull, enjoy all the beautiful things life will bring to them.

Chris fought lung cancer and COPD for 4 long years, but now he can breathe easy in Paradise.

In lieu of flowers, expressions of sympathy may take the form of charitable donations made payable to Hospice of Western, Kentucky, 3419 Wathens Crossing, Owensboro, Kentucky 42301. Envelopes will be available at the funeral home.

Haley McGinnis Funeral Home & Crematory is both honored and privileged to be entrusted with the care of Mr. Aull. Leave your messages of condolence for the family of William Christopher “Chris” Aull and sign his virtual guestbook at www.haleymcginnis.com.