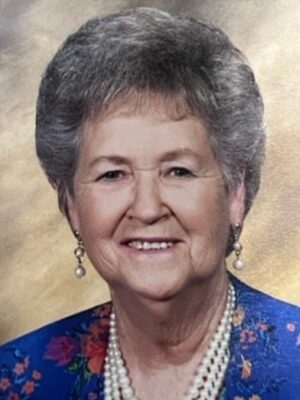 Kathryn Cline, 94, of Owensboro, passed away on Friday, November 18, 2022, while under the care of Hospice of Western Kentucky.  She was born February 5, 1928 in Daviess County to the late Elvis and Irene Musgrave Hope.  Kathryn was a homemaker and member of Yellow Creek Baptist Church where she volunteered in the office and the kitchen.  She helped prepare meals for various church groups and for the Wednesday night dinner.  Kathryn also volunteered at the hospital and her children’s and grandchildren’s schools where she was involved in the P.T.A. and served as homeroom mother numerous times.  She was a Mom and Grandma to everyone she met.  Kathryn loved raising her children, grandchildren, and great grandchildren and always enjoyed cooking many wonderful meals for them.  She enjoyed going to all her grandchildren’s and great grandchildren’s sporting events.

Kathryn was also preceded in death by her husband of 69 years, Charles W. Cline on February 23, 2014 and two brothers, Elvis Hope, Jr. and Ira D. Hope.

The funeral service will be 2 PM Monday, November 21, at Glenn Funeral Home and Crematory.  Entombment will follow in Owensboro Memorial Gardens Mausoleum.  Visitation will be from 10 AM until the time of the service Monday at the funeral home.

The family would like to give a special thanks to the Heartford House and Hospice of Western Kentucky for all the love and compassionate care they gave Kathryn.

Memorial contributions may be made to Yellow Creek Baptist Church, 5741 Highway 144, Owensboro, KY  42303.  Memories and condolences to the family can be shared at www.glenncares.com.