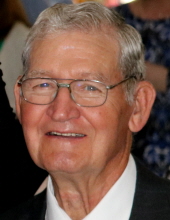 We are heartbroken to announce the passing of our loving father, grandfather, brother, uncle, and more, William Ellis Edge. Surrounded by a loving family, Ellis passed from the comforts of his home in Whitesville on November 21, 2022.

Ellis was born on November 26, 1941, to the late Louis and Nora Edge and deeply treasured time spent with family, which is likely why he never ventured far from his childhood home. At 19, he married his wife of 61 years, Sharon, and they formed quite the family, with 10 children, 23 grandchildren, and 21 great-grandchildren.

Ellis took great pride in caring for his family farm, with over 100 acres of hay, tobacco, and cattle, and relished the opportunity to volunteer in the community. He was a member of the Trinity High School Booster Club and Hall of Fame, the Whitesville Lions Club, the Cattlemen’s Association, and the Whitesville Hoedowners, regularly playing music at local nursing homes and the Wendell Foster Center.

The definition of a Raider, Ellis attended as many basketball, softball, and baseball games as he could, especially those featuring his kids, grandkids, and great grandkids. He also coached softball, baseball and Women’s Catholic League and regularly drove the bus to various athletic events.

Ellis began his professional career at Murphy Miller and Daniels Construction before spending the next three decades at Century Aluminum. When he wasn’t raising a family, farming, or working, he enjoyed bird hunting and rooting for the Kentucky Wildcats and Atlanta Braves.

All that aside, perhaps his fondest accomplishment was spending time with his family and friends. Ellis’s kind heart and welcoming personality were a constant at music sessions, sporting events, and barbecues throughout the community.

In addition to his parents, Ellis is preceded in death by his son Eric, grandson Nolan Ryan, his three sisters Joan, Lois, and Karen, and his two brothers, Butch and Eddy.

We are forever grateful to Josie Jackson for extending the highest level of care to our father during the final stages of his life.