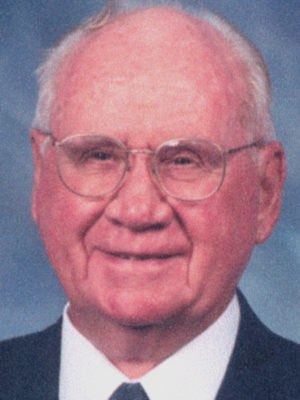 Mr. Blackstock was a U.S. Army veteran of World War II, having served in the European Theatre of Operations under Gen. George S. Patton.

He worked for Liggett & Meyers Tobacco Company in Virginia and North Carolina before being transferred to their subsidiary, Pinkerton Tobacco Co. (Swedish Match) in Kentucky. He retired after forty years of service.

Mr. Blackstock was a Kentucky Colonel and an active member of First Baptist Church where he served as a deacon and attended the Maverick Sunday School Class.

He was preceded in death by a brother, Charles Blackstock.

Mr. Blackstock is survived by his wife of 63 years, Hazel Blackstock and his daughter, Lisa Roberson of Atlanta, Georgia.

The funeral service will be 12:00 PM, Saturday, November 24 at Glenn Funeral Home and Crematory where visitation will be from 10:00 AM until time of service. Entombment will follow at Owensboro Memorial Gardens.

Memorial contributions may be made to First Baptist Church.

Memories and condolences for the family of Robert Singleton Blackstock, Jr. may be shared at www.glenncares.com.