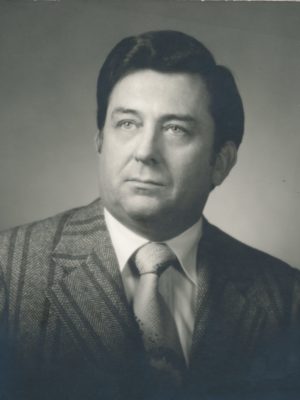 Martin Eugene Knott, 92, of Owensboro, passed away November 26, 2018, at the Heartford House while under the care of Hospice of Western Kentucky. Martin was one of twelve children, born in Daviess County on March 20, 1926, to the late Proctor and Mary Florence Knott.

He grew up in Browns Valley and in 1944 went to work at the age of seventeen for Modern Welding Company. Martin worked at Modern Welding as a janitor and tack welder at night while attending high school during the day. His job was put on hold during World War II, when he left to train for the Air Corps, but it was still waiting for him when he returned. In 1948 he began working as a salesman and moved to the new Houston plant in 1952 to operate the sales effort there. Martin later returned to the home plant in Owensboro and was elected first Vice President of Sales in 1970. He also served as a Director for the Steel Tank Institute where he helped shape the direction of glasteel tank production. Martin retired in 1989 completing 45 years of service for the company.

His other great love was aviation. Martin enjoyed flying airplanes and working on them. Martin also enjoyed raising a garden at the farm he and his wife, Mickey, owned in Thruston.

The funeral service for Martin Knott will be at 10 a.m. Thursday at Glenn Funeral Home and Crematory, with Father Pat Reynolds officiating. Visitation will be from 3 p.m. until 7 p.m. Wednesday and after 9 a.m. Thursday at the funeral home. Entombment will be in Christ Chapel at Owensboro Memorial Gardens.

The family has asked that expressions of sympathy take the form of contributions to Shriners Hospitals for Children Attn: Office of Development 2900 N. Rocky Point Drive, Tampa, Florida 33607 or lovetotherescue.org.