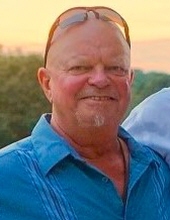 Chad Allen Roberts of Whitesville, KY was called home after a 3 ½ year battle with

also the love and prayers of so many others not present. He was born on February

lieu of second award; and Army Commendation Medal with Bronze Cluster in lieu

Chad was employed at Aleris/Commonwealth for 21 years, lastly serving as

Casting Maintenance Superintendent/Outage Planner.  He was a lifelong member

of St. Mary of the Woods Catholic Church in Whitesville. God was always first, his

family second, and UK sports were third. Chad was a passionate man, as anyone

could attest to who saw him watch UK sports. He also made it a lifelong goal to

strong and often loud opinions on the matter. Some of his favorite pastimes were

golfing with his buddies, hunting, and puttering around in his golf cart, family

dogs in tow, visiting with neighbors. Chad’s pride and joy were his children. In his

life on Earth, he was able to witness two who graduated from college and two

who have served in the United States Marine Corps.

No matter where he might be, Chad stopped whatever he was doing for his

powerful testimony to his close relationship with the Lord. Chad will be missed by

all who knew him, especially by his family.

Chad is survived by Stacey, his loving wife of 25 years, and children, Chassity,

Zeke, Zach, and Briar; his siblings, Dwayne and Lisa, Kelly Jo and Marty, Chris and

Shelia, Bruce and Angie, Jody and Virginia, Donna and Dan; aunts, uncles and

many nieces, nephews, and cousins; and his special pal of 15 years, “Lucky Dog”.

the Woods Catholic Church. Burial with full military honors to follow at St Mary of

the Woods Cemetery. Visitation will be from 3pm to 7pm on Tuesday, January 24,

in Whitesville, KY. A Funeral Dinner will follow burial.

Funeral Mass will be live streamed at www.cecilfuneralhome.com