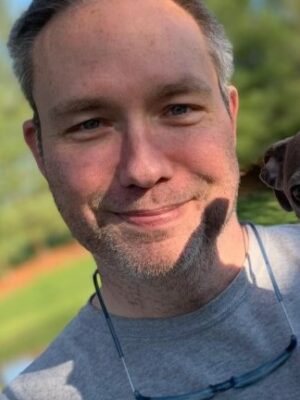 Ben Brumley, 53, of Newburgh passed away January 21, 2023, at his home. He was born in Owensboro on October 3, 1969, to the late John “JW” and Virginia “Jenny” Newbold Brumley. He attended Crossroads Christian Church. Ben worked at Ascension Health in the IT department and worked in IT for over 30 years in various fields from Daymar College to the medical field. Ben accomplished numerous advanced IT Microsoft certifications throughout his career. Anyone that knew Ben knew that he was always the life of the party and found humor in any and all situations. He loved fiercely, especially his family. When Ben did something, he was all in- including his love of Star Wars and Hillsong. His passion was photography and was well known for his action photography at sporting events. His larger-than-life personality and love for others leaves all of us heartbroken. He will be greatly missed.
Along with his parents he is preceded in death by his brother David Brumley.
Ben is survived by his wife Susan Gayle Jones Brumley; his children Zachary Brumley of Denver CO, Kelcey (Joseph) Early of Owensboro, Justin (Megan) Brumley of Newburgh, IN, TJ Jones of Boulder CO, Will Brumley and Abbie Brumley both of Newburgh, IN; his grandchildren Aiden Reeves, Grayson Early, Harper Early and Miles Brumley; his siblings Rob (Lora) Brumley of Morgantown, KY and Laura (Tyler) McKinney of Palm Harbor, FL; along with his beloved animals Finn, Milo, Charlie, Bella and Ivy.
Services will be 2:00 pm Saturday, January 28, 2023, at Haley McGinnis Funeral Home & Crematory. Visitation will be Friday, January 27, 2023, at the funeral home from 4:00 pm to 7:00 pm and again on Saturday from 12:30 pm to 2:00 pm at the funeral home. Because Ben had a great love for Star Wars, the family wishes and encourages everyone to wear their favorite Star Wars shirt on Friday at the visitation.
Expressions of sympathy can be made to St. Jude’s Children’s Research Hospital in memory of Cooper Chapman, 262 Danny Thomas Place Memphis, TN 38105. https://fundraising.stjude.org/site/TR/GiftFunds/GiftFunds?px=5077283&pg=personal&fr_id=39300
Haley McGinnis Funeral Home & Crematory is both honored and privileged to be entrusted with the care of Mr. Brumley. Leave your messages of condolence for the family of Ben Brumley and sign his virtual guestbook at www.haleymcginnis.com.