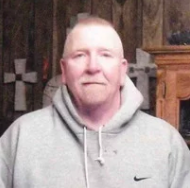 Kenneth Hayward Johnson was born in Grayson County, Kentucky on March 6, 1955. He worked at Vermont American for a number of years and was a member of the Mt. Olive Cumberland Presbyterian Church for 32 years.
He is survived by his wife of 33 years, Vonnie Gayle (Hay) Johnson of Big Clifty, Kentucky. Kenneth is also survived by one son, Kendall Johnson and daughter-in-law, Haleigh Johnson of Shrewsbury, Ky, two grandchildren, Redick Johnson and Lexie Johnson. Also surviving is his father, Bobby Johnson of Leitchfield, one brother, Michael Stephan Johnson of Horse Cave, one sister, Barbara Johnson of Leitchfield and one aunt, Linda O’Bryant of Elizabethtown, Kentucky.
He was preceded in death by his mother, Nell (Young) Johnson and one brother, Robert (Bob) Johnson.
Funeral services will be held on Monday, December 3, 2018 at 11:00 a.m. at the Mt. Olive Cumberland Presbyterian Church in Big Clifty, Kentucky. Visitation will be held from 4:00 to 8:00 p.m. on Sunday, December 2, 2018 at Watson and Hunt Funeral Home in Leitchfield and from 9:00 a.m. until 10:00 a.m. on Monday. Burial will be in the Mt. Olive Cemetery in Big Clifty.