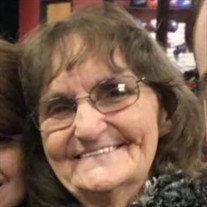 Margaret “Ellen” Bowlds Hornsby, 70, of Owensboro passed away on Friday, July 12, 2019, at Owensboro Health Regional Hospital. Margaret was born March 13, 1949, in Owensboro to the late Ancle and Ida Mae Bowlds. She was retired from Walmart.

She was a member of St. Joseph & Paul Catholic Church.

She enjoyed painting wooden cutouts with her family and spending time with them at The Smoky Mountains and she loved Sunflowers.

She also was preceded in death by her three sisters, Dorothy Jones, Billy Jean Bunch and Elsie Hillard; a brother, Joe Bowlds; and a brother-in-law, Jerry Hall.

Services will be at 6 p.m. Monday at Haley McGinnis Funeral Home & Crematory.
Visitation will be held on Sunday from 2 p.m. to 7 p.m. and after 4 p.m. Monday at the funeral home.

Expressions of sympathy may take the form of donations to American Cancer Society, Attn: RFL of Daviess-McLean, 3140 Parisa Drive, Paducah, KY 42003. Envelopes will be available at the funeral home.

Haley McGinnis Funeral Home & Crematory is both honored and privileged to be entrusted with the care of Mrs. Hornsby. Share your messages of condolence with the family of Margaret “Ellen” Bowlds Hornsby, at www.haleymcginnis.com.

To send flowers or a memorial gift to the family of Margaret “Ellen” Bowlds Hornsby please visit our Sympathy Store.