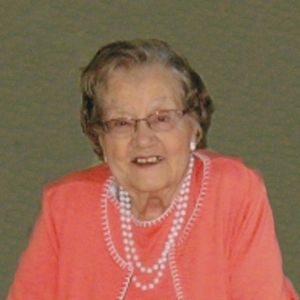 Mary Catherine Thurman Wilde (Kitty), 94, of Owensboro passed away Sunday July 14, 2019 while under the care of Hospice of Western Kentucky at Heartland Villa in Lewisport, KY. Kitty was born July 12, 1925 in Louisville, to the late George and Mary Lee Thurman. She was the last surviving of their four children. Kitty met the love of her life Maurice Wilde at a church youth group event, and eventually married him April 16, 1941. Together they enjoyed 53 years of marriage before his passing in 1994.

While raising her children she became an accomplished seamstress and cake decorator. Kitty was also very active in her community. She had been a PTA and Women’s Club president as well as a scout leader and was a 50-year member of Eastern Star. She loved to travel and especially enjoyed their time in Singapore and Malaysia when Maurice was sent as a liaison for the UN to help develop their manufacturing. They also enjoyed camping with their friends in Kosair Kampers.

She was devoted to the family she leaves behind. Surviving are her daughters, Maureen Fleming of Port Huron, MI, Kitty (Richard) Kerestan of Hamilton, OH, Elise (Colby) Farmer of Philpot, and Michele (Mark) Bramlett of Jasper, IN; five grandchildren, nine great-grandchildren; and three great-great-grandchildren.

The funeral service for Kitty Wilde will be 2 PM EST Thursday at First Lutheran Church, 417 E. Broadway, Louisville, KY 40202. Visitation will be Thursday from 1 PM EST until time of service at the church. Burial will follow at Evergreen Cemetery in Louisville. Care for Kitty and her family has been entrusted with Glenn Funeral Home and Crematory.

Expressions of sympathy may take the form of contributions to one’s favorite charity or First Lutheran Church.

Memories and condolences for the family of Mary Wilde may be left at www.glenncares.com