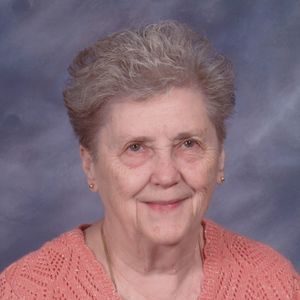 Anna Dolores James VanFleet, 89, of Rockport, IN, went to meet her Lord and savior on Sunday July 14, 2019 in Evansville, with her loving family at her side. Dolores, as she was best known to her many friends and family, was born April 14, 1930 in McHenry, KY to the late Ercie and Bertha Lucile Chinn James. She worked for many years as a bookkeeper for Thompson Homes of Owensboro. Dolores was a charter member of Lewis Lane Baptist Church where she sang in the choir, was a Sunday school secretary, served on many committees and played the organ and piano through the years. She enjoyed visiting with her many grandchildren, sewing crafts, quilting and working the daily crossword puzzles.

She also was preceded in death by her daughter, Sandra Ruth Baird Evans Lucas of Overland Park, KS; and a sister, Lois Arlene James Leach.

The funeral service for Dolores VanFleet will be Noon Saturday at Glenn Funeral Home and Crematory, where visitation will be Friday from 3 until 7 p.m. and Saturday from 10 a.m. till time of service. Burial will be in Oakwood Cemetery in Hartford, KY.

Memories and condolences for the family of Dolores VanFleet may be left at www.glenncares.com