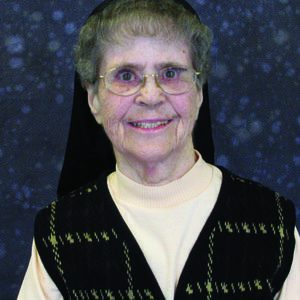 Sister Marie Brenda Vowels, 92, an Ursuline Sister of Mount Saint Joseph, died Friday, July 27, 2018, at Mount Saint Joseph, in her 73rd year of religious life. She was a native of Louisville.
Sister Marie Brenda was an educator for 31 years, then spent another 17 years as a parish minister. She loved all her ministries, but was most fond of the 30 years she spent ministering to Native Americans in New Mexico.
She taught at St. William School in Knottsville (1949-54), Precious Blood School, Owensboro (1973-74), and served at the Motherhouse in the Post Office (1975) and as an information receptionist (1999-2009). She ministered elsewhere in Kentucky.
Survivors include a sister, Barbara Whelan of Louisville; nieces and nephews and the members of her religious community.
The funeral Mass will be at 10:30 a.m. Tuesday, at Mount Saint Joseph, where visitation will begin Monday at 4 p.m., with a wake service following at 6:30 p.m.
Glenn Funeral Home and Crematory, Owensboro, is handling arrangements.
Donations in memory of Sister Marie Brenda may be made to the Ursuline Sisters of Mount Saint Joseph, 8001 Cummings Road, Maple Mount, KY 42356.
Messages of condolence may be offered online at www.glenncares.com