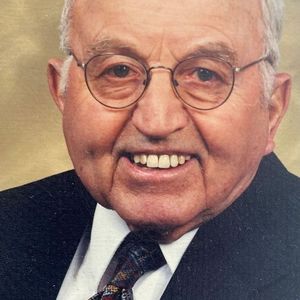 Robert Tucker “Bob” Robinson, 97, of Owensboro passed away Thursday July 15, 2021 while under the care of Hospice of Western Kentucky. Mr. Robinson was born on March 28, 1924 in Wyandotte County, KS to the late Loren Dale Robinson and Helen Craig Tucker Robinson. A WWII veteran, Mr. Robinson enlisted in the US Navy in 1942 as a high school senior in Silom Springs, Arkansas and was honorably discharged in March 1946. He attended Wichita State followed by the University of Arkansas, graduating in 1949. He was recruited by Texas Gas as a Construction Cost Accountant and moved to Owensboro in 1949, staying with Texas Gas until his retirement as Controller in 1985. Mr. Robinson joined Settle Memorial United Methodist Church on December 27, 1953 and was actively involved with the Administrative Board, Trustees, and the Open Door Sunday School class. He was the assistant Scout Master for Boy Scout Troop 24, member of the OMU Board, treasurer for the Free Clinic, and a YMCA board member.

The funeral service for Mr. Robinson will be Tuesday, July 20 at 2:00pm at Settle Memorial United Methodist Church. Visitation will be Monday, July 19 from 4:00 pm – 7:00 pm at Glenn Funeral Home and Crematory and after 1:00 pm on Tuesday, July 20th at the church. Entombment will be in Christ Chapel Mausoleum of Owensboro Memorial Gardens. Expressions of sympathy may take the form of contributions to Settle Memorial United Methodist Church or Hospice of Western Kentucky. Messages of condolence may be placed at glenncares.com