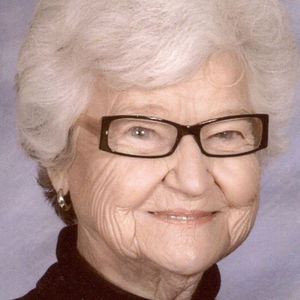 Margaret “Skip” Gaw Cox, of Owensboro, passed away October 9, 2021, at her home. She was born December 13, 1924, in Owensboro, to the late James William and Mary Josephine Thompson Gaw. Margaret was a charter member of Immaculate Catholic Church.

After graduation from St. Frances Academy in 1943, she became a “Rosie the Riveter,” at a defense plant in Evansville during World War II.
Margaret married her husband Anthony Joseph Cox in 1946 and was a stay-at- home mom for 20 years raising their 5 children. After the oldest was in college at UK and the youngest ready to start school, she decided to get a job and help out with expenses. Margaret then accepted a job at OMU as an accounting clerk, where she retired in 1990 after 20 years of service.

In addition to her parents, she was preceded in death by her husband, Anthony Joseph Cox in Oct. 2020; her son, Tony Cox Jr. in 2014; her daughter, Kay Norris in 2017; her brothers, Bill Gaw, George Gaw, Charles Gaw, and Gerald Gaw, and J. Richard Gaw; and her sister, Dorothy Gaw Hudson.

The funeral service will be 2pm Saturday, October 23rd at Glenn Funeral Home and Crematory with Fr. Tony Jones officiating. Burial will follow in Mater Dolorosa Cemetery. Visitation will be from 10am until 2pm Saturday at the funeral home.

The family would like to give a special thank you to Sidney Board of Time Savers, a true blessing to Margaret and her family in their time of need.

Memories and messages of condolence for the family of Margaret Cox may be offered online at www.glenncares.com.