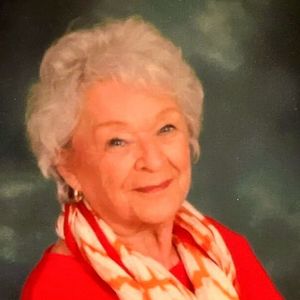 Judy “Nana” Rector, 84 of Owensboro, took her last breath on earth and her first breath in Heaven on Wednesday, December 29. She had been surrounded by her family. She was born in Owensboro to the late Andrew George and Lucille Theiss Mischel on November 14, 1937. Judy was a member of the first 4-year
graduating class of Owensboro Catholic High School in 1955.

She married Don Rector on July 28, 1961, and for the next 39 years they devoted their lives to raising their 8 children while stretching every dollar. Judy attended every sporting event or extracurricular activity of her children. Nana then continued with the same tradition for her grandchildren and great-grandchildren, provided it wasn’t a bridge day.

She was “Nana” to all their friends and teammates, and a self-proclaimed “greatest Aces fan”. She treasured every Wednesday and Thursday with her bridge family. They enjoyed traveling, eating, laughing, shopping and just being together. They were a huge part of her life. She also enjoyed planting flowers and her beautiful yard. Judy loved reminiscing about the numerous trips taken with her coworkers and board members at the Owensboro Housing Authority, from where she retired in 2002.

She was preceded in death by her parents; husband, Don Rector; sister, Rose Marie Savage; brothers, Billy Mischel and Bobby Mischel; her father- and mother-in-law, Rex and Martine Rector; her sister- and brother-in-law, Ann and E.L. Chapman; and her brother-in-law, Tom Donahue.

Judy’s life was built on her Catholic faith which sustained her through the good times and the bad. Always there to support her loved ones, her mantra had become, “Jesus, I place all my trust in You, take care of everything”. Well done Good and Faithful servant, rest in My arms.

The funeral mass for Judy will be held at noon Saturday at St. Stephen Cathedral. Visitation will be Friday from 2 p.m. until 6 p.m. with prayers at 6 p.m. at Glenn Funeral Home and Crematory and Saturday from 10 a.m. until noon at the church. Burial will take place Monday at 10 a.m. in the Mischel family plot in Elmwood Cemetery.

Expressions of sympathy may take the form of contributions to Owensboro Catholic Schools or Hospice of Western Kentucky.

A huge thank you to Doctor Jinah Sayed and staff, the doctors and staff of Owensboro Regional Medical Health, and the staff of Hospice of Western Kentucky for the comfort and care during Mom’s last days.

This is Mom’s last Rector-Rama, many more to come…

Memories and condolences for the family of Judy Rector may be left at www.glenncares.com