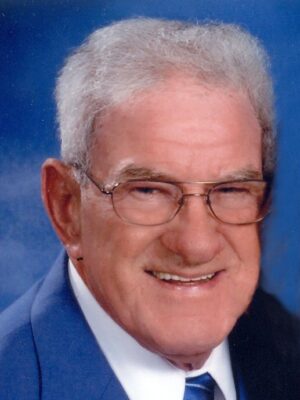 Franklin Fay Beller, 84 of Owensboro went to see his Lord January 8, 2022 surrounded by his family. Franklin Fay Beller was born August 5, 1937 in Livermore to the late Lester Euwin and Augusta Atherton Beller and married Martha Chance Jennings Kennedy on December 28, 2001. He was a graduate of Livermore High School. He worked at Alcoa for 33 years. Prior to Alcoa, he was in the Kentucky Army National Guard. He was a member of the Veterans of Foreign War. He was a Deacon Emeritus, sang in the choir, a greeter, and served community meals as a member of Third Baptist Church. He was a member of the Hadi Shriners. He was a master mason of the Yellow Banks Owensboro Lodge 130. He was a member of Travelers Protective Association. He was a Kentucky Colonel. Besides loving his church, he loved UK basketball, Kentucky Wesleyan Basketball, bowling, gardening, traveling and going to grandchildren’s events.
Besides his parents, he was preceded in death by a brother William Presley Beller, a sister Anne Strong, a sister Helen Willis, and a grandson Houston Beller.

Masonic services will be held 11:45 a.m. on Tuesday with the funeral service to follow at Noon on Tuesday, January 11, 2022 at James H. Davis Funeral Home. Burial will be at Elmwood Cemetery. Visitation is from 9:00-11:45 on Tuesday at the funeral home.