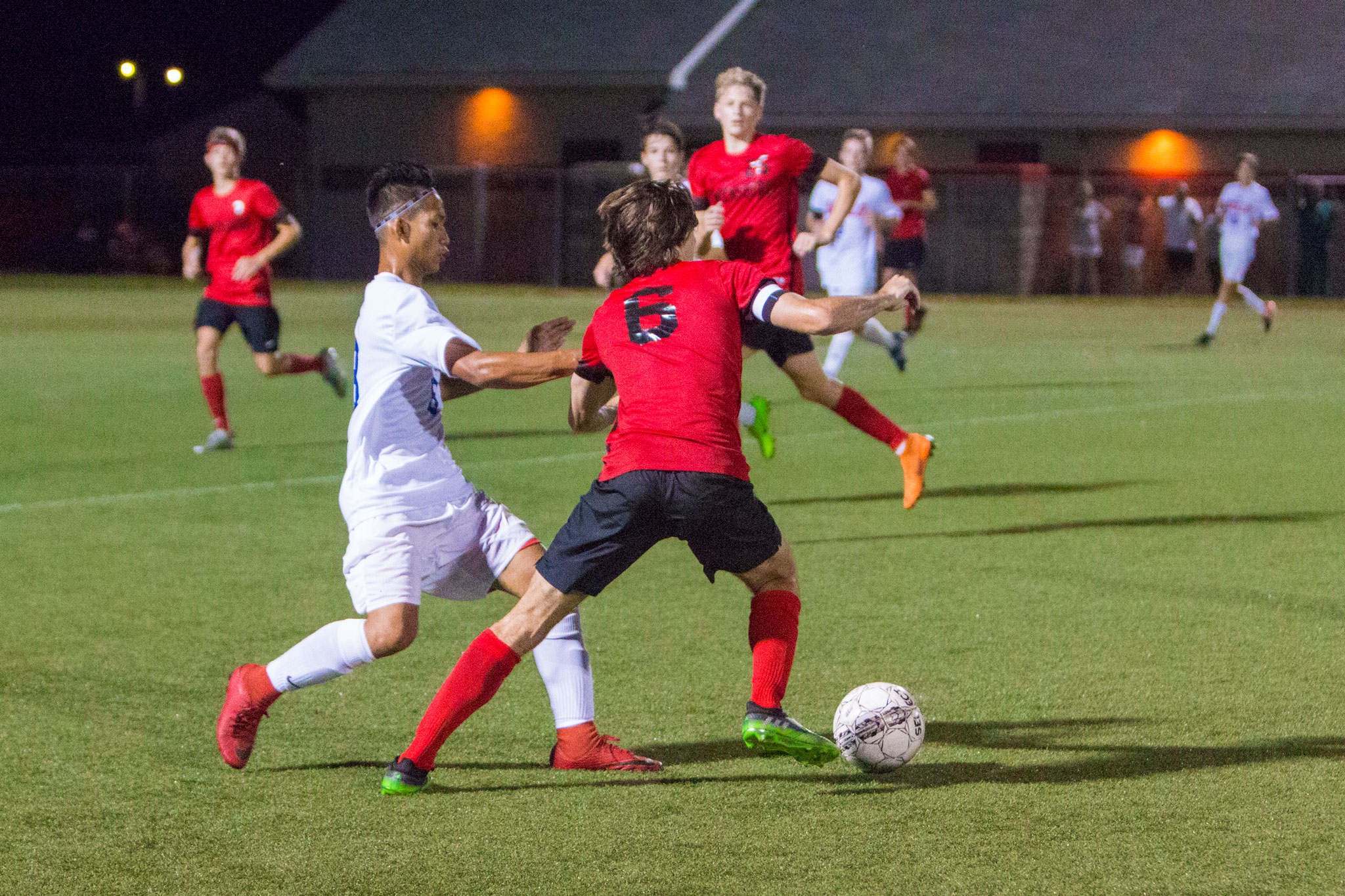 Apollo earned a 1-0 victory over Owensboro in a District 9 boys soccer game Thursday at Shifley Park. | Photo by Ryan Richardson

Apollo’s boys soccer team held off a late attack to come away with a 1-0 victory over Owensboro Thursday at Shifley Park.

The Eagles (1-1) scored their only goal early in the second half off a set piece near midfield. The initial attempt bounced off the goalkeeper, and Apollo’s Jaelin Kirk followed the shot to find the back of the net. Head coach Ryan Poirier said he was glad the team took his halftime speech to heart.

“I told the guys at halftime, the difference in the game is going to be who is working when they don’t have the ball, who’s following shots, who’s doing the simple things,” he said.

The Red Devils (0-1-0) largely controlled possession for remaining 36 minutes, but they weren’t able to get a goal. Head coach Ryan Haley said Owensboro came out a little sluggish, but regrouped at halftime.

“In the second half, I feel like possession was dominantly in our favor,” he said. “We knocked on the door, but no one answered. Unfortunately, in the game of soccer, even if you’re around the goal for 90 percent of the half, if you don’t score, you lose.”

After a loss earlier in the week, Poirier said he was proud of the improvement the Eagles showed since their game at South Warren. He said the Dragons use the same game plan that hopes Apollo can follow going forward.

“They played like we want to play,” Poirier said. “It helped us see if we do what we’re supposed to, keep the ball moving from side to side and up and down the field, we’re going to be a really tough team to beat this year.”

Even after bringing home the district win, Poirier said there is more room to grow.

“We’re still trying to work on our rotations and see who helps us in the best position,” he said. “It’s nice to win a game like this super early, but I know there’s a lot more that we need to grow on. Our passing is not as good as I think it can be. That’s where I’d like to see our game really take the next step. If we keep that up and play with the intensity and energy we just did, we’ll be a tough team to beat.”

Haley said the Red Devils also have some work to do, as they have yet to score this season through two games played.

“It’s strange that we haven’t found a goal yet because we’re capable of scoring from almost every position on the field,” he said. “These kids are good players and play well together. I think they’ve got to get a taste of a goal and decide how much they like it, and maybe they’ll be hungrier.”

The Eagles finished the game with only three shots on goal, getting two from Kirk and one from Wes Knott. Goalkeeper John Zuberer had 15 saves.

The Red Devils totaled eight shots on goal, with two each from Grayson McFarland, Zane West and Josh Head, as well as one a piece from Andrew Saltsman and Austin Sovar.

Apollo next plays Saturday at 7 p.m. against Meade County, while Owensboro will host Graves County Saturday at 6:30 p.m.