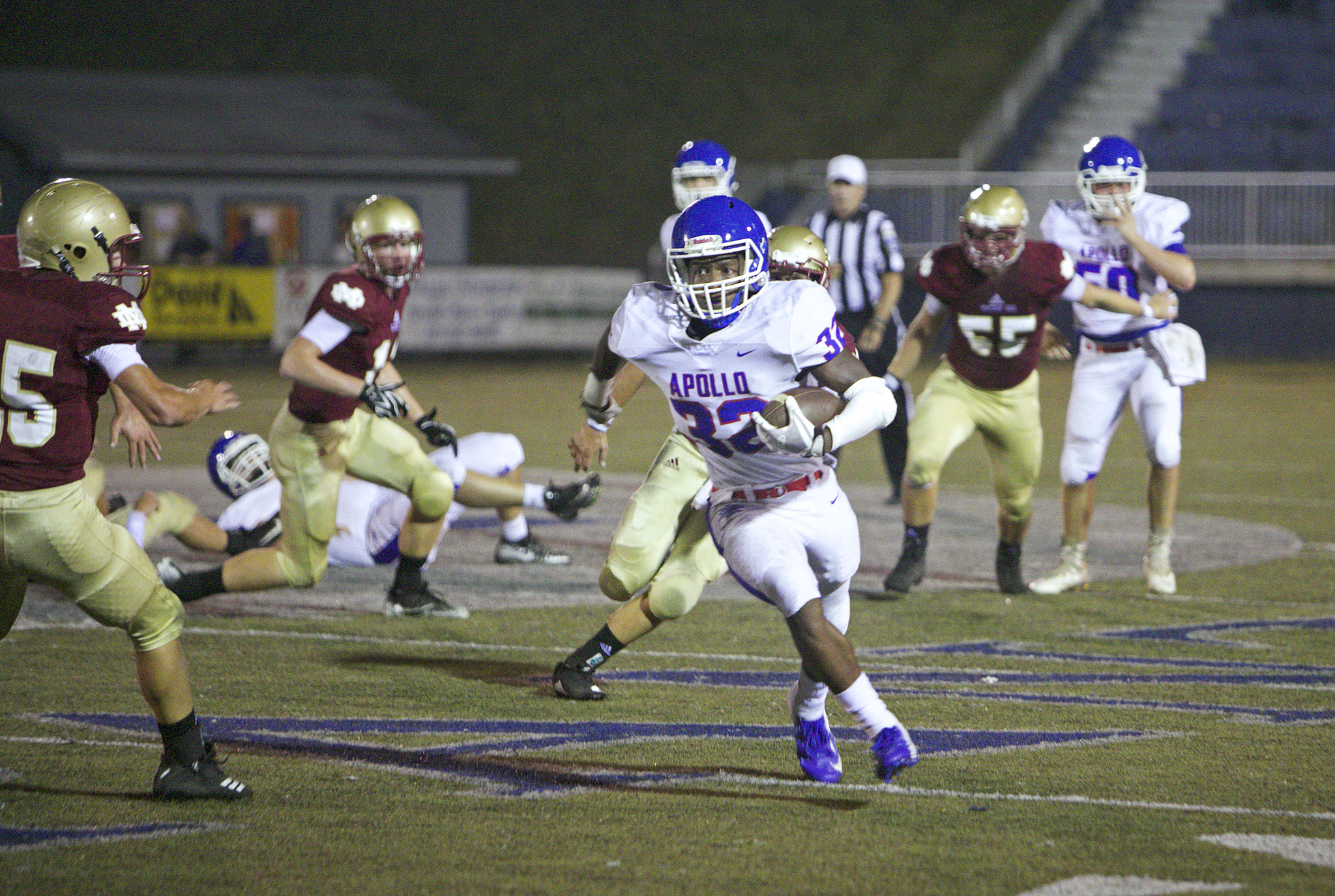 All Apollo had to do was move the ball 6 inches. Needing to get to the 21-yard line, the Eagles lined up deep in their own territory, gambling that they could move the chains.

Quarterback Colby Clark pushed forward behind his line and converted the 1st down, and Apollo (2-0) held on for a 17-10 win over Evansville Mater Dei at the Reitz Bowl in the Evansville Teachers Federal Credit Union Border Bowl Football Challenge.

Clark and running back Mariano McKenzie led the Eagles in a game in which each team only had eight possessions, but head coach Phillip Hawkins said this win wasn’t about any specific player.

“The theme for this whole week was that this game was not about any single person,” he said. “It was about the Apollo program turning the corner — not just celebrating a seven-win season, but moving forward and taking it to a whole other level.”

It was a big win for Apollo, as Mater Dei was ranked third in the Indiana Class 3A polls coming into the game.

“This was a very important game, because this is a very good football team,” Hawkins said. “I’m pretty sure not too many people thought we were going to win this game.”

The Eagles struck first on the opening possession of the game. McKenzie blasted through the defense for a 75-yard touchdown on the third play from scrimmage.

The Wildcats put together a long drive that ended with a field goal, then took the lead on their next possession with a 7-yard touchdown pass with 7:33 left in the half.

The ensuing Apollo drive stalled in the red zone, though Wes Knott was able to connect on a 37-yard field goal to tie the game at 10-10, a score that held until halftime.

The lone score of the second half came on the first possession for the Eagles. Clark escaped trouble on 3rd-and-14 to find receiver Sam Parm for a 44-yard completion to flip field position. Clark then rolled out of the pocket and tucked the ball, rushing 28 yards for the touchdown.

Both teams continued to drain the clock with long drives, but neither could find paydirt again. Mater Dei came close on a couple different occasions, but a handful of penalties killed every big gain they were able to get.

With the clock winding down, Apollo found themselves in ultimate control. They needed half a yard, and Hawkins said he let his players decide whether to punt or go for the knockout.

“I put my trust in them,” he said. “I think you’ve got to show some trust to get some trust. They’ve been trusting me since I got here, and I showed them a little trust. Look what they did. I’m proud of them.”

The conversion by Clark turned into a 39-yard gain by McKenzie two plays later, and the Eagles let the final seconds tick away.

In a contest where possession is hard to come by, Hawkins said it can be tough to execute the game plan. He prepared his team last week, though, by making them be methodical when marching down the field.

“You come to a game like this when you’ve got to hold the ball and scoring is not that easy, and it’s good to know they can waste some clock and be mature about it,” he said of the Eagles. “They’re unselfish.”

Standing with the trophy in hand after the game, Hawkins couldn’t help but smile. Still, he made sure it was known it’s not for him.

“A very little, minute piece of this is me,” he said, pointing to the trophy. “It’s really the 85 kids we have in our program that have to deal with me on a daily basis. They work and work and work, and it’s about them.”

Hawkins said while it’s a group effort, Clark and McKenzie carry the team.

“They’re the lifeblood of this program right now, and I knew that when I got hired,” he said. “I think very highly of them, and they keep delivering. They’re taking the leadership roles, and they’re tough.”

McKenzie ended the night with 216 yards on 22 carries. Clark went 13-for-16 with 128 yards and the rushing touchdown.